Pottery kebab for a traditional taste of central Anatolia 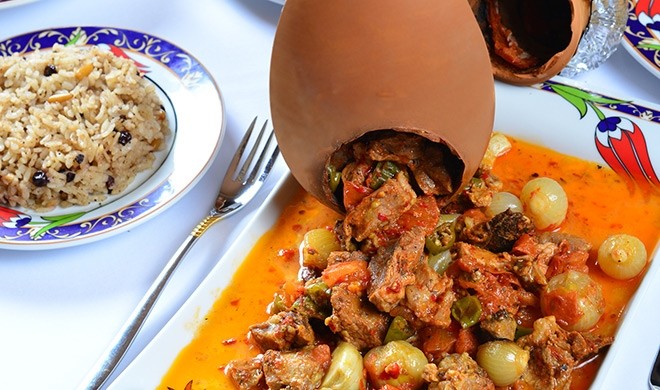 by Daily Sabah Feb 04, 2017 12:00 am
The pottery kebab (testi kebabı), is the most renown dish of the Cappadocia region. The traditional pottery kebab is made using an Avanos pot. Avanos, set on the banks of the Red River is the "pottery village" of Cappadocia. Prepared using only beef, tomatoes, capsicum and onions, with the addition of a mixture of herbs, the contents of the pottery kebab is placed into small, single-serve pots. Initially cooked in large clay pots and served directly on plates, it was later observed that serving equal amounts to everyone was difficult and those who got the last of the dish were served the more greasy parts of the meat. Hence, the pottery makers of Avanos were given orders for smaller individual-serve pots. This also allowed the meat to cook better.

Once the ingredients are placed into the pot, the opening is sealed off with a potato and placed in the tandoor to cook. As the potato becomes harder, a hole emerges in the middle, creating a pressure-cooker atmosphere inside the pot. The high temperature and pressure that develops inside the pot is the secret behind its unique taste.

Although most restaurants will have your pottery kebab order ready within 20-30 minutes to keep customers from waiting, traditionally, it needs to cook and simmer for about three hours. In Cappadocia, some of the busier restaurants will start cooking the kebab a couple of hours before peak times to ensure that customers enjoy a well-cooked traditional meal.Dibek Restaurant in Göreme, Cappadocia, set in a 475-year-old building, usually likes its guests to pre-order the pottery kebab, so they can start preparing hours in advance. While you wait for your meal at Dibek, sitting on cushions around the round tables on the floor, your kebab will be brought to you in the clay pot with a mini hammer. Using the mini hammer, the waiter will crack open your pot and pour its contents onto your plate, ready for you to dig in. A taste you will definitely want to try again.
RELATED TOPICS