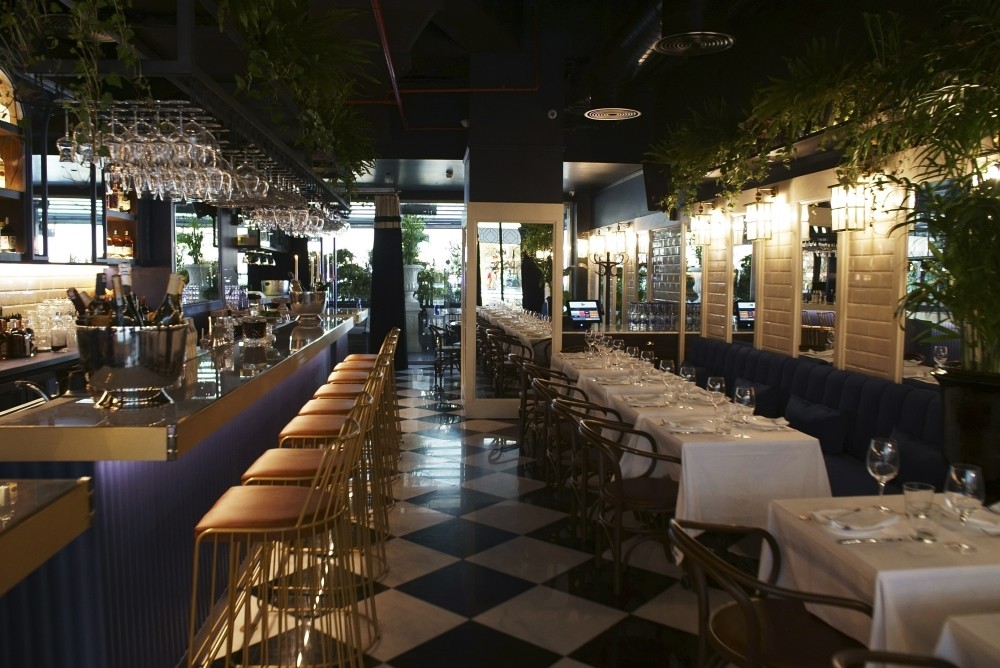 Martinez, which gets its name from the famous Martinez Hotel in Cannes, will take you to the French Riviera.
by Arda Sayıner May 06, 2017 12:00 am

If you are a fan of Mediterranean culture and cuisine, Istanbul has elegant options. Plus, you can listen to high quality music while enjoying the many delicious dishes

Mediterranean cuisine is an obvious favorite worldwide, well-known for its health benefits and widely appealing flavors, this cuisine is a winner in everyone's book.

This week, I would like to talk about two different venues that feature flavors inspired by the Mediterranean table. Located in Akmerkez shopping mall, Martinez, named after the famous Martinez Hotel in Cannes, will take you to the French Riviera and is the first stop on our Mediterranean tour. The restaurant's partners, Uğur Karabayır and Çetin Kolukısaoğlu, worked wonders again. Furnished in various shades of blue, fabulous bar stools and beautiful mirrors, the venue instantly reminds you of a cool sea breeze. With access from both the street and from the mall, the restaurant's atmosphere is both dynamic and pleasant. The outdoor terrace is sure to be a favorite among Istanbulites on hot summer nights who not only want to take advantage of cool evenings, but also of the privacy that venue's strategically placed blinds provide. Although it is not a big restaurant, the architect Mehmet Yücebaşoğlu has utilized every inch perfectly.

Even though the name Martinez is indicative of the Mediterranean region, the menu also includes examples from other regions of the world. My favorites included the "sun choke soup," with the "seabass ceviche" as an accompanying starter. The diced sea bass was divine, alongside the green lentil salad on a bed of humus. For the main course, I enjoyed the salmon served with artichoke puree, French beans and mandarins, a dish that was both delicious and healthy. The "fried chickpea balls" was a unique flavor on the menu and a great alternative for vegetarians, along with the shrimp patties that featured a delicious stuffing of coriander and cashews. I congratulate Nihat Sancar, the venue's chef and recommend that you drop by Martinez the first chance you get to enjoy a pleasant Mediterranean-inspired meal.

In a side note, a magnificent exhibition began at the Hudson, another of Uğur Karabayır's venues, where the exhibition of Handy Queen called "I'm not interested in Pop-Art" will be open until May 28 within the scope of HudsonArt in cooperation with BubiProje. This exhibition is a must see for anyone who loves pop culture.

Now we head off to Portugal, or at least off to a venue that will make you feel like you were there. Last week, I participated in a Fado event at the St. Regis Hotel, which was launched with the support of the Portuguese Embassy in Turkey and was designed to promote Portuguese culture. This Portuguese-inspired venue featuring the country's cuisine and music is a limited-time installation in the ballroom of the hotel. Experiencing it for the first time, I immediately fell in love with the Fado music featured at the venue. This style of music embodies both the soulful lament of the wives who have lost their husbands to the sea, as well as lost or unrequited love.

Known as the "architect of music" in Portugal, Ana Lais performed the melancholy Fado music perfectly. The singer was accompanied by musicians playing "Portuguese guitars," a traditional Portuguese instrument. With claret red curtains, antique seats, dim lights, red goblets and rooster trinkets on the tables, the ballroom was masterfully designed to feel like a piece of Portugal, including a "Portuguese home" concept at the entrance. The little details were also beautiful, including Portuguese porcelain and a bookcase loaded with books depicting Portugal's culture, alongside Portuguese furniture, knickknacks and local apparel. The overall effect made you feel like you were in Lisbon or Porto.

The Portuguese chef Miguel Paulino created an interesting and special menu for this event. The first dish on the menu was "Caldo Verde," literally meaning "green vegetable stock." One of the national foods of Portugal, the soup had a creamy texture and was prepared with potato and kale. For the starter, we tried "Acorda," a dish famous in fishing villages that is prepared with shrimp, coriander, onions and garlic and served with an egg cooked over low heat. The main course, "Arroz de Pato a Antiga" is an old recipe prepared with layers of duck, rice, vegetables and herbs and baked in earthenware pots in a low heat. Dinner was wrapped up with "Pastel de Nata," a traditional Portuguese zest that is served with cinnamon ice cream. This dessert reminded me of Turkish pastry desserts.

I congratulate Paula Leal Da Silva, the ambassador of Portugal to Turkey, on this cultural event. Included in the cultural heritage list of UNESCO, Fado music is an experience everyone must have and there is no better way to experience it than by immersing yourself in Portuguese culture and cuisine.