Istanbul cuisine: A perfect blend of east and west 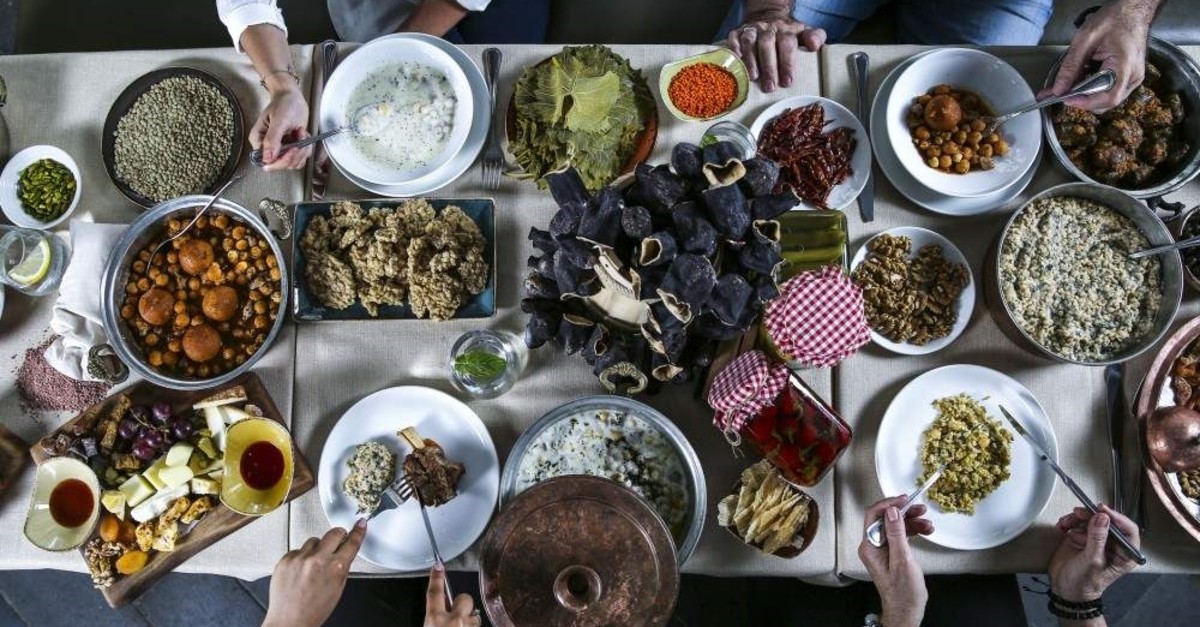 Istanbul, which once served as the capital of the Roman, Byzantine and Ottoman empires, is also one of the most important gastronomic cities in the world, owing to its unique cuisine

Istanbul attracts many visitors thanks to its grand historical significance to both the East and the West, its magnificent architectural works, its vibrant economy, cultural sights and unique delicacies.
On the latter, a grand rediscovery is occurring in which the dishes of Ottoman palace cuisine, as well as those of the city's traditional Greek, Armenians and Jewish communities, are experiencing something of a comeback.

In a statement to Anadolu Agency (AA), master chef and agricultural engineer, Deniz Orhon, a member of the Başkent University Turkish Culinary Culture Research and Application Center Advisory Board and American Chef Federation and World Chef Federation, said that Istanbul's culinary traditions are enriched by an 8,500-year-old history.

Orhon points out that Istanbul's cuisine has both the features of settled and nomadic communities: “Istanbul's cuisine brings together people who are born of various ethnic and religious traditions, and many states and nations. Turkish culture from Central Asia blends with Arab culture and that of the Balkans. We also see a dash of different foodstuffs enter our kitchens with the arrival of the Albanians,” Orhon said. “Plus, we can read from history that the nobles and minorities, Tatars, Circassians and Abkhaz who fled from the oppression of the Russians settled in Istanbul and the city embraced these people at that time.”

Istanbul cuisine: A mixture of cultures

Orhon recalled how Istanbul had welcomed migration throughout its history and that this attitude persisted with the arrival of Syrian refugees. “Istanbul's cuisine has inevitably diversified thanks to this cultural diversity,” he continued. “This cuisine has its own special features and recipes. Saffron sea bass soup and chestnut chicken broth soup are very good for health, while there are also recipes that are also only known by ethnic names, such as 'Persian rice' and 'Circassian chicken,' as well as 'Pastor's beef stew' a reference to the city's Orthodox population, and "leek meatballs" a dish of Jewish origin. Davut Pasha, an Ottoman diplomat in the Governorate of Lebanon in the 1800s, also has a dish named after himself that survives to this day. Istanbul cuisine has a plethora of historical interest and cultural and ethnic blends. You can find a bit of every flavor.”

Orhon noted that this culinary vastness was, however, unfortunately lacking on the menus of modern restaurants and that Istanbul's cuisine was in dire need of an overhaul. “We foodies and those interested in food science and culture, we all want Istanbul's cuisine to have a more prominent role fit for gastro-tourism,” he said. “Napoleon once said, 'If our whole world would be one country, Constantinople would be the capital.' We say that if the world were a single country, then, its cuisine would be called Istanbulite, as the city long absorbed products and ingredients from trade routes spanning East and West. Istanbul was a very important catalyst for the development of multiple dishes.”

Food culture researcher and private chef Kutsi Akıllı said that Istanbul cuisine was theoretically the largest city cuisine in the world. “To prove this in practice, you have to dig through the city's cultural history because Istanbul has long been a place where the masters of seven climates and four seasons lived, be it the Ottomans, Romans or Byzantines, and your scale of spices range from the edge of the Balkans to the shores of China, from the Crimea to Ethiopia,” Akıllı further stressed. “To enrich a cuisine, a certain amount of infrastructure is required. These are physical, cultural, and ethnic infrastructures. The reason why Istanbul's cuisine is so rich comes from the fact that it possesses all these features. When we speak of Turkish or Ottoman cuisine we are also talking about a legacy from Byzantium and Rome. These are dishes the Greek Cypriots have maintained to the present day.”

Food, an important part of history

Akıllı explained that Istanbul held a special place in history as the capital of empires overseeing large swathes of humanity. “To avoid any uprising in the capital, foodstuffs have always had to be readily accessible,” he continued. “This was the case in Byzantium, Rome and the Ottoman Empire. Wealth is also an essential element for the development of food culture. If you are going to experiment on food, you need to have enough ingredients to waste... As I said, physical factors are crucial in the development of a cuisine.”

Akıllı said that accessing ingredients was a big problem, especially in the ancient world, and that the ingredients could be provided by sea only in the easiest and fastest way, adding that food from different flora and fauna was delivered easily and quickly only by sea.

“Sea transit is also significant, as well as maritime cuisine. Istanbul also has a prominent fish cuisine. You are at a crucial location in terms of both the land and the sea, which is the clincher. This has provided the greatest opportunity for Istanbul, a blend of geography, native culture and the influence of outside cultures,” Akıllı said, underlining that the city had a multicultural make-up: “If you have different cultures in a city, the same food can be transformed into a completely different dish with different cooking techniques and different ingredients and then exchanged between cultures. Plus, there are also religious differences. Especially abstinence and fasting can change the food economy and food culture very much. We need to put wealth and poverty on them because you cannot compare Istanbul with another city.”

Akıllı explained that during the Ottoman period, there was an imperial cuisine and a folk cuisine in the region. “Food from all parts of the empire rose to the top, whether for economic reasons or bore out of taste, even entering the palace, while the food found in the palace could also trickle downwards, even spreading to the public, according to the expense of the ingredients. The important thing is that we have to consciously make use of this wealth, introduce it to people and use it in gastro tourism,” he concluded.

Chefs Association Chair Ismail Ay, on the other hand, said that one of the two main origins of Istanbul cuisine was the culinary culture created by Armenians, Greek Patriots and Jews in the Pera and Balat regions during the Ottoman period.

Ay stated that street dishes such as kokoreç (grilled sheep's intestines), stuffed mussels, stuffed spleen and mackerel are unique to this region. “Sweet yeast bread, olive oil dishes, appetizers are the indispensable tastes of Balat, Galata and Pera region are the cuisine of the old period. Seafood, even shrimp, as well as offal from the Armenians, Greek Patriots and Jews, were indispensable. We are talking about a period in which half of the caught fish were salted and dried and traded with wheat and pulses outside Istanbul,” Ay said, pointing to the palace cuisine where dried fruits and meats, especially hunted animals, were cooked as the second origin.

“Fatih Sultan Mehmet is said to have loved shrimp,” he said. “In the palace's kitchen, seafood and liver were floured and fried in hot oil. The rice was in the foreground. The flavors of that day also exist today. In the Balat region, you can see tripe, and around Kurtuluş, you can see sweet yeast bread and almond products. These are the special tastes of Istanbul. During the Republican era, when Istanbul received great migration, it became a mixed cuisine of the whole country. We need to revive old Istanbul dishes and re-introduce artichokes, olive oil dishes, appetizers and seafood.”