Lights out for Puyol 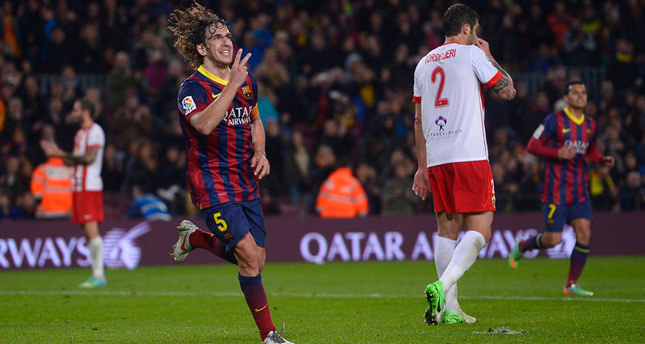 Barcelona's revered 35-year-old captain Carles Puyol announced his decision to part ways with the club. As he drawing the curtains on his time at Barcelona his future remains uncertain

An emotional Carles Puyol called a press conference on Tuesday to announce his decision to part ways with Barcelona. Making his debut for the club in 1999, Puyol would go on to appear in nearly 600 matches in all competitions for the outfit.

Plagued with Injuries over the past few seasons and limited to only 12 appearances this term, the Barcelona and Spain star decided his time at one of the world's most successful clubs had come to an end. "The club knows of my decision. It doesn't mean that I am leaving today, there are three months of the season left to play," said Puyol who agreed to a two year early termination with the Barcelona board earlier in the week. "I do not know what I will do after June 30. I will need to rest and think. We will see then… I wanted to call this press conference to thank everyone, directors, teammates, managers and media - thank you everyone for everything you've done for me," continued the emotional Puyol.

The defender announced that his painful decision was necessary after his recent struggle for fitness following successive surgeries "After the two aggressive surgeries, it's taking me a lot to get back to the level I demand myself to keep playing. More than I thought and much more than what doctors told me. That's why I made this decision," he said.

A true Blaugrana, Puyol was born in the Catalonian town of La Pobla de Segur. He left his hometown club to join Catalonia's pride and joy Barcelona in 1995. He spent the next four years playing in varying levels of the club's youth development, making his first squad breakthrough at the age of 20. No one could have guessed that the youngster would go to become one of the club's most iconic figures. Fifteen years later, now the captain of both the world's top ranked club and national side, his guidance brought Barcelona three Champions League trophies, siz La Liga titles, two Copas Del Ray, six Supercopas de Espana, two UEFA Super Cups and two Club World Cups.

His guidance on the national stage has been equally remarkable for Spain as the once trophy forlorn nation now stand at the peak of FIFA's world ranking as they have won two successive EUROs and now look to continue their record by winning the 2014 FIFA World Cup in Brazil, making Spain the first country to win four successive top-tier international competitions.

Endearingly nicknamed "The Wall" by Barcelona fans, Puyol has always been known for his aggressive, committed style of defensive play. A physiotherapist at the club once said that Puyol was "the strongest, who has the quickest reactions, and who has the most explosive strength." His physical stamina and strength had long been the key factors behind his relentless and impressive style of play. Until recent years, no one could fathom an injury befalling the player, let alone sidelining him for a season. But now football fans the world over and club supporters alike are disheartened with the reality that one of football's remaining few iconic players that symbolize the full embodiment of the club will take his final bow at the Camp Nou after his age finally caught up with him.