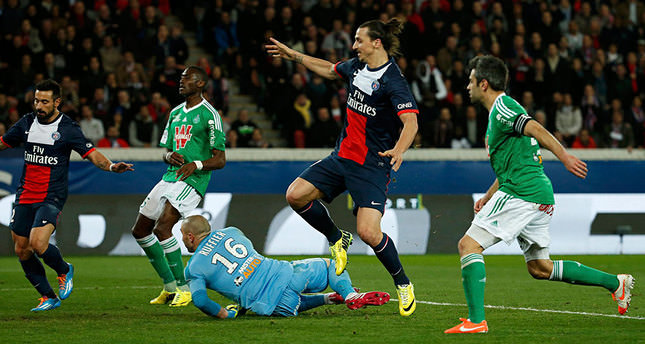 by reuters Mar 18, 2014 12:00 am
PARIS – Zlatan Ibrahimovic took his season tally to a club record 40 goals as the Sweden forward's double inspired runaway leaders Paris St Germain to a 2-0 home win against St Etienne in Ligue 1 on Sunday. The French champions maintained their eight-point lead over second-placed Monaco, who had Dimitar Berbatov to thank for a 3-2 win at Olympique Lyon. PSG have 70 points from 29 matches after Ibrahimovic surpassed Argentine Carlos Bianchi's PSG record of 39 goals scored in all competitions in a single season (1977-78).

Laurent Blanc's PSG side predictably dominated possession but the first clear chance was for St Etienne when Salvatore Sirigu tipped away Franck Tabanou's spectacular rising shot on the turn from outside the box in the 13th minute. Ibrahimovic, however, opened the scoring in the 16th minute at the end of a bizarre move.

The Swede played the ball into Blaise Matuidi, who was flagged offside but referee Lionel Jaffredo ignored the linesman's call and the ball fell for Ibrahimovic who found the back of the net with a low cross shot.