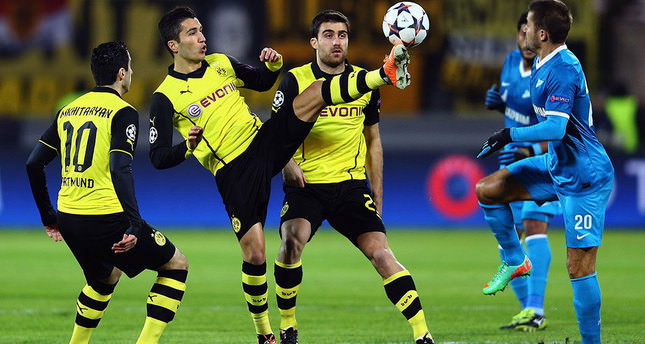 Klopp's young side will look to seal the deal against struggling Zenit after winning the first leg of the match-up 2-4 in St. Petersburg

DORTMUND – Borussia Dortmund's notoriously hot-tempered coach Juergen Klopp has barred fans from watching the team train this week as he seeks a calm lead-up to the side's Champions League Round of 16 second leg tie against Zenit St Petersburg on Wednesday.
Klopp was banished to the stands for dissent in a 2-1 loss to Borussia Moenchengladbach on Saturday as Dortmund lost their fourth league game of the season on the weekend prior to a Champions League match.

He should cut a more passive figure this week, however, as Dortmund go into the return leg with Zenit as overwhelming favourites to advance to the quarter-finals following their convincing 4-2 victory in Russia last month. Klopp was quick to play down his latest indiscretion on Saturday, saying he had done nothing wrong when he questioned the referee over a decision. "When you have 80,000 fans in an emotional state and only one person does not understand it then you are out," said the coach, who was also sent off in a Champions League group stage match at the start of the season. "I only shouted 'why are you not calling it?' although I did it with my by now world famous facial expression," he told reporters. Klopp's dismissal could be seen as an unwanted distraction but his players appear determined to maintain their focus on the main target of the season with the Bundesliga title destined to remain in Munich. "On Wedne sday, we have t h e next big game and we do not believe we are through yet," defender Marcel Schmelzer said. "St Petersburg will demand everything from us."

Klopp has had to contend with a host of injuries since the start of the season and Wednesday's game will continue the trend as several key players miss out, including Sven Bender, Jakub Blaszczykowski and Ilkay Guendogan.

There is some good news, however, after Robert Lewandowski returned to action on Saturday and has been ruled fit to face the Russians. Playmaker Henrikh Mkhitaryan is also expected to return despite missing Saturday's game but Marco Reus remains a doubt. "We have reached a point where we can compensate for any absences and still play good football," Klopp said.

Zenit have bigger concerns, going into the match under the guidance of new coach Sergey Semak, who replaced Luciano Spalletti earlier this month.

The 38-year-old has been handed a caretaker role at the club, though he lost his first game in charge, a 1-0 defeat to CSKA Moscow last week.

Defender Cristian Ansaldi and forward Andrei Arshavin missed the loss against the reigning Russian Premier League champions through injury and the side go into this week's match on a dreadful run of form in Europe's elite club tournament.

Zenit have failed to win any of their last four games in the Champions League, qualifying for the Round of 16 with a solitary win in the group stage. "Ahead of the Dortmund game, we need to stay united. This is a time when we have to demonstrate that we are united," keeper Yuri Lodygin told reporters. "This concerns the game and everything surrounding it. We need to make sure that we support one another. "It is never easy when a head coach leaves, but we have already had time to reflect on this. We need to make sure that we answer questions about our mental state going into the game. Everything else is fine."