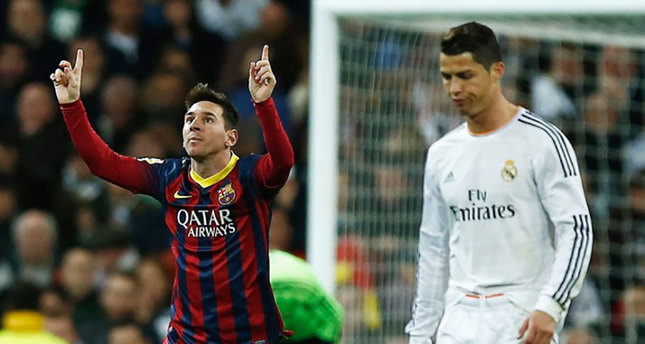 Leonel Messi's hat-trick gave Barcelona the win at the Santiago Bernabeu, closing the gap between the Catalans and Real Madrid to just one point while Altetico is now tied with the Los Blancos on points

ISTANBUL — Going into Sunday night's game Real Madrid had the opportunity to increase the gap between themselves and Barcelona to seven points, essentially delivering a huge blow to the title ambitions of their bitter arch rivals. Despite taking the lead twice at their home stadium, the Los Blancos were unable to secure the match as the closing stages saw Barcelona win the game 3-4.

Man of the match Leonel Messi gave the Catalans a running start in the seventh as his through ball found midfield maestro Andres Iniesta who would then rocket the ball into the top corner to give the guests the first goal of the match. Karim Benzema had the chance to bring Real Madrid to equal terms in the 12th minute, however the French national inexplicably over-shot just 10 meters away from the goal.
The former Lyon man would not have to wait long for a second chance at goal as he would head Angel Di Maria's cross into the back of the net just 10 minutes later. Benzema would hook up with Di Maria once more in the 24th minute to volley a second cross past Victor Valdes to give the home side a 2-1 lead.

Messi would grab his first goal of the match three minutes from half time through a series of passes in the Real Madrid box which resulted in Neymar slipping a ball through to the technical Argentine who had no trouble of pinpointing the bottom right corner.

A minute after the goal the tension between the world's two strongest sides resulted in an altercation which earned both Cesc Fabregas and Pepe yellow cards. Right before the final whistle. Benzema would rue the chance he missed at completing his hat-trick as the Frenchman once more sent the ball well over his mark.

Real Madrid were falsely given a penalty in the 55th minute despite Barcelona's objections when Dani Alves clipped Cristiano Ronaldo near the edge of the box. The La Liga's top marksman had no difficulty converting from the spot to once more give the Los Blancos the lead. The 63rd minute saw Sergio Ramos sent off when he pulled down Neymar inside the box. Neymar had slipped behind the Mardird defense and the captain's action resulted in a penalty and a controversial strait-to-red booking. Messi would find no difficulty grabbing a brace from the spot as his shot found the top corner.

The closing stages of the match saw Barcelona rewarded with another spot kick when Xabi Alonso and Carvajal brought down Iniesta in the box in the 84th minute.

Messi would once again convert the opportunity into a goal, completing the hat-trick that would see the Catalans through to the end.

Elsewhere in the La Liga Atletico Madrid won 0-2 away against Betis to tie Real Madrid at the top of the league table with 70 points.

Following an uneventful first half Braian Rodriguez was given a second yellow card for committing to a handball leaving Betis to continue a man short. Two minutes later Turkish national captain Arda Turan would assist Gabi giving the capital club the lead. Just six minutes later Atletico would add another goal to their tally when Koke chipped a cross onto the head of Diego Costa who only had to tap the close range effort past the keeper.

Following Real Madrid's loss and Atletico's win, the La Liga title is now up for grabs between the three Spanish Giants. Real Madrid lead the pack with 70 points, while Atletico only come second on goal-point differential while Barcelona stand only one point behind the two capital clubs.