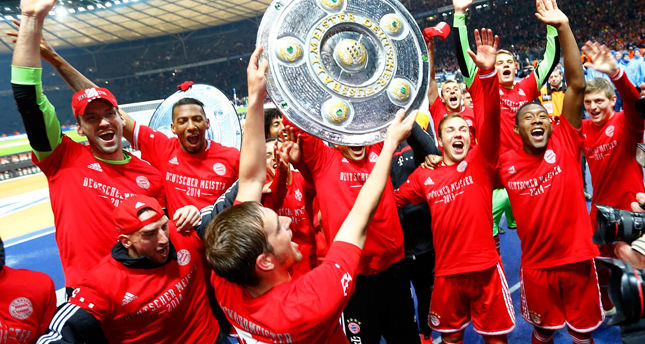 by Associated Press Mar 26, 2014 12:00 am
BERLIN — Bayern Munich set a new milestone in its dominance of German football on Tuesday, beating Hertha Berlin 3-1 to wrap up the quickest Bundesliga title in 51 years of the league. Goals from Toni Kroos, Mario Goetze and Franck Ribery sealed the unbeaten defending champions' 24th German title with seven games to spare, bettering the mark set in last year's record- breaking campaign by one game. Adrian Ramos pulled one back from the penalty spot for Hertha, but there was to be no denying Pep Guardiola his first Bundesliga title in his first season as coach. "We worked very hard for this title. When you win by 25 points people can think it's easy. But it's not easy, especially after the last season with three titles," the Spaniard said. "When you win 19 games one after the other, it speaks for the mentality of the team." Bayern's 19th consecutive win, its 10th consecutive victory away from home, and its unbeaten run of 52 games are all Bundesliga records. Bayern finished 25 points ahead of Borussia Dortmund last season and is even more dominant this campaign. "We can see you, but we still need a telescope," Dortmund coach Juergen Klopp said.