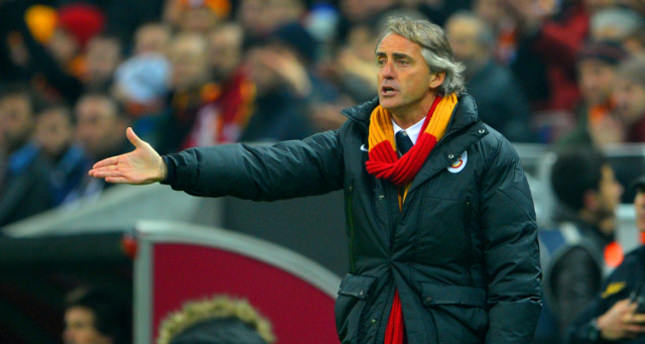 ISTANBUL — On Saturday, Roberto Mancini's Galatasaray traveled to Sivas to take on Roberto Carlos' Sivasspor on the heels of their 1-0 derby win over Fenerbahçe. On paper, the Lions should have had no problem dispatching their lesser opposition, instead the Istanbul club managed to lose the match 2-1 despite drawing level in the 42nd minute.

This latest performance has once again highlighted the internal issues plaguing the side which achieved great success in last year's domestic competitions as well as the champion's league.

At the start of this season, anyone in Turkey would tell you that Galatasaray would win their third successive title this year and add an iconic fourth star to the club's crest. At the start of the season, Galatasaray had Turkey's most successful manager, Fatih Terim, a manager they won four and two successive championships with in his two spells. Galatasaray was also one of Europe's top sides following a Champions League campaign which saw them eliminate Shalke 04 before giving Real Madrid stiff competition in the quarter finals. They had a star-studded in-form squad with names like Dider Drogba, Wesley Sneijder, Burak Yılmaz, Selçuk İnan and Fernando Muslera. The stage appeared to be set for the Lions to not only parallel their European success but also become the first club to reach the 20 title mark in Turkey.

Fast forward to the last five weeks of the Turkish domestic season and now Galatasaray are a mere shadow of their last season selves.
This peril was first foreshadowed in Galatasaray's Champions League 1-6 opening game defeat to Real Madrid at the Türk Telekom Arena, an event which saw club legend Fatih Terim sacked in favor of Roberto Mancini. This sacking would trigger a long chain of events within the club and the ranks of its supporters, a chain of events which has now exploded into fullblown supporter mutiny.

Mancini's arrival was off to a bad start as Galatasaray, though remaining a powerful force at home, failed to achieve the victories of yester- season at away matches. The fans, though in full opposition of the decision to bring in Mancini in favor of the man they dubbed "Emperor Terim," held their tongues as through a stroke of luck Mancini took Galatasaray out of the Champions League group stage.

Hopes were raised as the free-spending manager spent a club record 18.2 million euros (TL 53.5 million) bringing in seven new faces during the January transfer window. The new players initially breathed new energy into the outfit as Galatasaray produced their highest scoring games of the season by scoring over five goals in two of their next three matches. Galatasaray looked fully ready to topple Fenerbahçe at the top of the league table as the nine point gap was dropped to just three points.

But sure enough it became apparent that the new-found form was temporary, as over the last month and a half, Galatasaray have not been able to record a victory outside the Türk Telekom Arena. Aside from the conciliation prizes of defeating Beşiktaş and Fenerbahçe and drawing in their home elimination stage match against Chelsea, the Lions have failed to make any reassurances for the club's future.

As players such as Yılmaz, İnan and Muslera can't hold a candle to their form last year and the reality of Drogba's exit and age are becoming further solidified, Mancini appears unable to provide any sort of much needed internal stability.

The defeated and accepting stance Mancini has taken and his apparent lack of care have only gone on to further demoralize a side struggling to remain a single unit on the pitch, and now Galatasaray supporters couldn't find a clearer way to send the message that they want the Italian deposed of in favor of Terim as game after game, home or away, club ultras have resorted to continuous chants for resignation.

Mancini has lashed out at the chants stating that he would have no issue taking off from where he is unwelcome in an attempt to bluff the club and its supporters into submission, yet to no avail as it has become clear that the club's supporters just want him gone.

Without Mancini's willing resignation and with the club administration unwilling to pay a 12 million euro toll for his sacking, Galatasaray's future remains uncertain. The only clear reality for the club is that as the weeks go by the squad's chemistry and form decline and the already uncontrollable resentment in the stands of the Türk Telecom Arena continues to ferment.
RELATED TOPICS