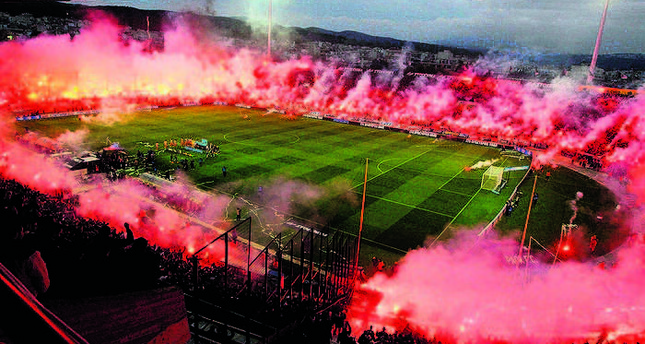 by Stelyo Berberakis
Apr 19, 2014 12:00 am
ATHENS — Football fans in Greece were heartbroken once more; the Greek Cup semifinal in which Thessaloniki's PAOK and Piraeus' Olympiacos face-off was the last straw.The semifinal match played at PAOK's Toumba Stadium was delayed for a full hour and 15 minutes due to PAOK fanatics lighting flares and throwing them onto the pitch causing the stadium to fill with smoke. Despite several announcements urging the PAOK supporters to stop throwing flares, they persisted.

The match was almost canceled after the fanatics went on to throw live anchovies at the visiting side's substitutes and managerial staff. The game only continued thanks to PAOK President Ivan Savvid's reassurances.

The decision to continue the game was in large part due to the damage it would cause Greek football, not the financial damage.

The fanatics continued to harass Olympiacos players, whom they view as serious enemies, and went on to point lasers in their eyes while throwing projectiles ranging from toilet paper to coins and bottles when they attempted to take corner kicks. This caused the match to be played for 110 minutes instead of the conventional 90. This was not the first such occurrence, nor the second or third match to end up resembling a neighborhood brawl.

The "European quality" players ended up fighting against themselves and occasionally the opposing managers. If this wasn't enough, Olympiacos fans ended up bombing a café in Athens owned by PAOK's Georgios Tzavellas, the player guilty of continuously harassing Olympiacos players. This confrontational match in Thessaloniki once again displayed just how far Greece - crowned champions in the Euro 2004 - has strayed from European football culture. The match ended in a 1-0 PAOK win; however Greek newspapers decided to focus on the indescribable nature of the hatred between the two teams, the despicable displays of fanatic groups and the incompetence of the Greek Football Federation.

Now all eyes are on the revenge match to be played in Olympiacos' Karaiskakis Stadium in Piraeus as people wonder if the same hooliganism will be on display again.

The decline in the quality of Greek football, the fanatics' habit of invading the pitch and the many reasons behind these pitiful displays caused the famous AEK Athens side to fall from continuous Champions League participation to the Greek third division.

AEK Athens' decline from a great side once on par with Greece's other giants and Aegean rivals Fenerbahçe, Galatasaray and Beşiktaş to a team struggling in the Greek third division shows the sad nature behind the failure of Greek football.
Last Update: Apr 19, 2014 1:04 am