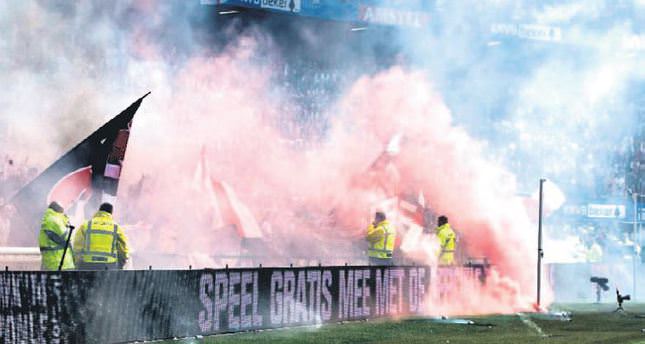 by reuters
Apr 23, 2014 12:00 am
AMSTERDAM — Ajax Amsterdam fans who threw fireworks on to the pitch which led to Sunday's Dutch Cup final against PEC Zwolle to be halted twice will be punished, Dutch FA (KNVB) director Bert van Oostveen said. PEC Zwolle's sensational 5-1 win over the favorites was marred by the violent scenes which were described as "unacceptable" and "scandalous" by van Oostveen and Ajax coach Frank de

Boer respectively. The game was stopped just after the start for an half hour as fireworks and smoke bombs damaged the Rotterdam pitch and set an advertising board alight. De Boer said: "It was scandalous what happened, it had nothing to do with football. They discredited Ajax at a time when we wanted to show off the best about out club. I condemn this horrible action. "There were about 100 supporters who behaved disgustingly." Thirty three people were released on Monday after paying fines or being cautioned on charges of public drunkenness, setting off fireworks or insulting police. Dutch media reported these arrests were not related to the incidents
during the match.