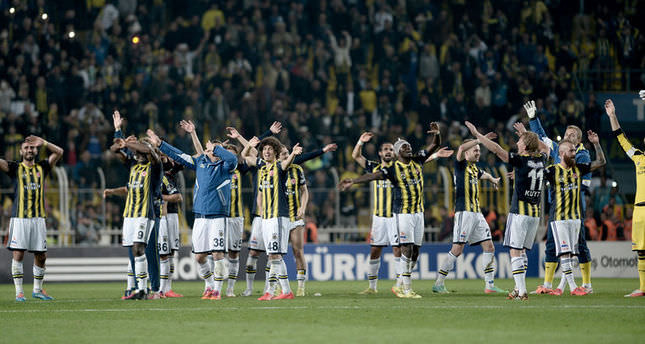 While the Turkish Super League runs down with Fenerbahçe as its undisputed champion, Yellow Canaries fans eagerly await the chance to lift their 19th top flight title

ISTANBUL — The especially bitter competition between Turkish giants Galatasaray and Fenerbahçe is without a doubt among the world's stiffest football rivalries. Fenerbahçe had gained the upper hand in this rivalry for most of the early 1990's and 2000's, however, whenever it came to obtaining the symbolic stars above the club emblem (one star for every five championships) Galatasaray have continuously stumped the Yellow and Navy club. Until the 2011-2012 season it appeared as though Fenerbahçe would outpace their sworn enemies for the coveted fourth star, until two terms under Fatih Terim transformed a struggling Galatasaray into a dynamo that earned two consecutive titles to reach the 19th title mark, one win ahead of Fenerbahçe.

Fenerbahçe's fans can now rejoice as just one win separates them from equalizing the race with Galatasaray, a win they now have in hand as all that separates them from their arch nemesis is physically lifting the cup for the 19th time.The root of this over century-old rivalry comes down to the historic reality that both clubs were founded around the same time (Galatasaray in 1905 and Fenerbahçe in 1907) on different ends of the Bosporus. In today's Istanbul, a trip from Fenerbahçe's hub Kadıköy to Galatasaray's Şişli is no more than a simple bus ride across Istanbul's iconic Bosporus Bridge, but back in the early days of the Turkish League, the distance between the two clubs allowed for greater polarization.

Whereas Beşiktaş, a club also located on Istanbul's European side, only represents the neighborhood from which it gets its name, Galatasaray remained the ambiguous representative of Thracian Istanbul while Fenerbahçe, alone in its Asian grandeur came to symbolize Anatolian Istanbul. Recent decades further fueled the ageold rivalry. Galatasaray pulled ahead in terms of overall success. Galatasaray is the only Turkish club to win two, let alone any continental accolade (the 2000 European Cup and 2001 Super Cup). They hold a commanding lead over the Yellow Canaries in Turkish Cup victories having won 14 to Fenerbahçe's six. As Fenerbahçe struggled for nearly three decades to win a Turkish Cup, a barren spell that lasted from 1983 to 2012, Galatasaray's consecutive performances not only won them the domestic cup but also put them ahead in terms of Turkish Super Cup qualifications and victories. Since Galatasaray held a total domestic lead of 15 accolades, the rivalry between the two has become one measured in terms of total top-flight wins. As this football season winds down to completion, Fenerbahçe's fans are eagerly awaiting the official season's end trophy ceremony while their Yellow and Red counterparts from across the Marmara ready themselves to cheer on their team on next season's opening day in September. This season saw tensions rise and reflect onto the pitch in derbies between the two and next year will be no different as the race for the fourth star and the bragging rights that come with it are coming ever nearer.