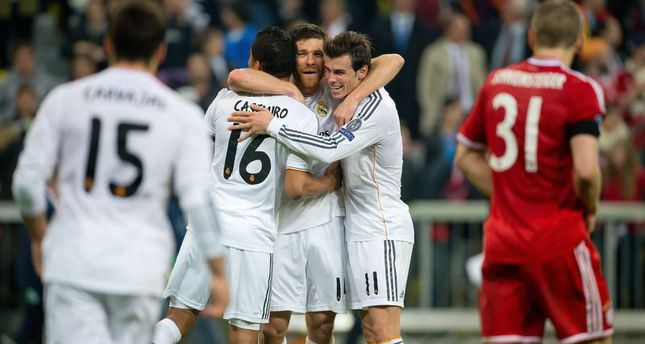 Madrid completed a 5-0 aggregate victory and will now play either Chelsea or Atletico Madrid in the May 24 final in Lisbon. Bayern's slumped to its worst home defeat in the competition, and equaled its heaviest loss overall - 4-0 away to Barcelona in 2009.

Madrid had never won in Munich in 10 previous matches, losing nine of them.But this time, Carlo Ancelotti's team put its stamp on the game early and struck with awesome efficiency.

Ramos headed home in the 16th and 20th minutes, and Ronaldo raised his tally to a competition record 16 goals for the season to take Madrid one win away from a record 10th title. Madrid is in its 13th final.

It was a bitter defeat for Bayern coach Pep Guardiola, who had so much success against Madrid when he was in charge of Barcelona. Bayern was seeking to become the first team to defend the Champions League title.

A corner by Luka Modric was met By Ramos, who headed down past Manuel Neuer, as Dante failed to challenge the Madrid defender.
A minute later, Dante was booked for bringing down Ronaldo.

The second goal came after Di Maria's swinging free kick into the box. Pepe nodded the ball on and the diving Ramos headed into the net.

Real's third was a fast break that left the Bayern defense trailing far behind.Benzema fed Bale, who easily outpaced Jerome Boateng and passed to the unmarked Ronaldo, who calmly slotted home in the 34th. Ronaldo then fired a low free kick through the wall in the 89th to complete Madrid's superb performance.

A minute of silence was held before kickoff in memory of former Barcelona coach Tito Vilanova and Vujadin Boskov, a former Serbian coach of Real Madrid.Both died last week.