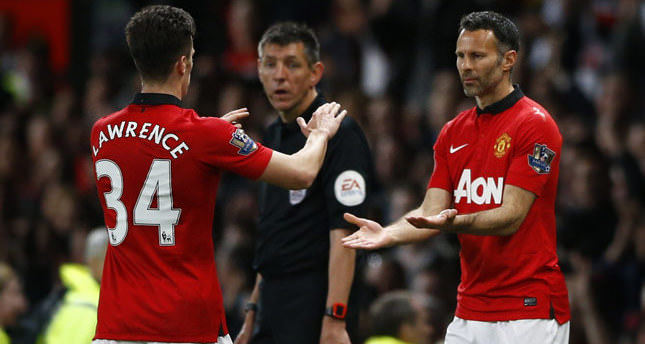 by Associated Press May 08, 2014 12:00 am
MANCHESTER, England — Manchester United gave a debut to a potential star of the future on the night it may have had one last glimpse of a recent great. Ryan Giggs played possibly his last game at Old Trafford, entering in the 70th minute of Tuesday's 3-1 win over Hull.

James Wilson, an 18-year-old forward, scored twice in his Manchester United senior team debut. Robin van Persie had the final goal, off an assist from Giggs, the 40-year midfielder who made his debut in 1991 was appointed interim manager on April 22 after David Moyes was fired.

Giggs has not decided whether to play next season, when current Netherlands national team coach Louis van Gaal may take over as United's manager.

Giggs gave debuts to Wilson and 20-year-old forward Tom Lawrence, started 19-year-old Adnan Januzaj on a wing and began with a back four that included youngsters Alex Buttner, Phil Jones and Chris Smalling. "You've seen a little glimpse of the future and this is what this club is about," Giggs said to fans, speaking with a microphone on the field following the final whistle. Giggs made his 963rd appearance for United. With fans chanting "Keeper, let it in!" Giggs saw his long-range free kick tipped over the crossbar by Eldin Jakupovic in injury time. This could be Giggs' first season without a league goal since the Premier League began in 1992. Nemanja Vidic, a 32-year-old defender who has been with the club since 2006, played his final home game for United, which closes its season Sunday at Southampton. Vidic said in February he is leaving United, and he is expected to join Inter Milan.

Vidic began on the bench after accepting a memento from United great Bobby Charlton, then entered in the 22nd after Jones injured a shoulder in an aerial collision. Giggs said Jones, who was expected to be on England's World Cup roster had been taken to a hospital and it "didn't look great."

United (19-12-6) is seventh with 63 points and would qualify for the Europa League with a win Sunday combined with a loss by sixth-place Tottenham (20-11-6) at home to Aston Villa.