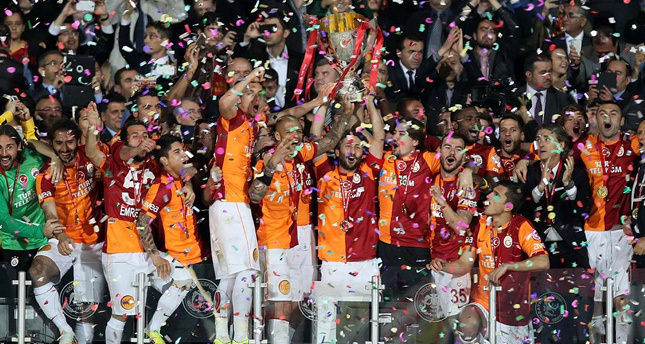 Istanbul's Lions overcame the Anatolian club Eskişehirspor 1-0 in Konya to bring home the Turkish Cup and the $1.5 million prize money

ISTANBUL — Managers of the two clubs met on Tuesday night to speak to the press. The atmosphere at the press conference was positive as Eskişehirspor manager Ertuğrul Sağlam handed Roberto Mancini the number 26 (Eskişehir's license plate code) jersey with the latter's name written across the back and club captains Sabri Sarıoğlu and Sezgin Coşkun posed for pictures with the cup.

Before the match got underway the local police force acted to calm riled fans after a fight had broken out at the entrance to the stadium between opposing fanatics.

The match kicked off on Wednesday night and came to a bore draw in the first half. The 34th minute was Galatasaray and Eskişehirspor ultras throw lit road flares onto the pitch and at the police officers present on the sidelines and the game had to be stopped for two minutes as stadium officials worked to clear the smoke.

The first half ended in a draw and the second half 's start was marked in a yellow card for We s l e y Sneijder. The Dutchman would score the only goal of the fixture in the 70th minute when Yekyta Kurtuluş sent a through ball into the box after picking up a poor clearance from the Eskişehirspor defense. The 82nd minute saw Hamit Altıntop take the field for the first time following a long leave of absence which saw him miss out on most of the season.

Eskişehirspor almost equalized the match in the 90th minute when former Galatasaray player Nejati Ateş missing by a small margin.
By winning Galatasaray their 15th Turkish Cup Roberto Mancini was able to continue his legacy of winning the domestic cup in every country he has managed in.

The high tensions between the two fan groups continued after the game resulting three incidences of violent assaults. A Galatasaray fan leaving the stadium with his young son was stabbed with a broken beer bottle and two others were stabbed with knives in other altercations.