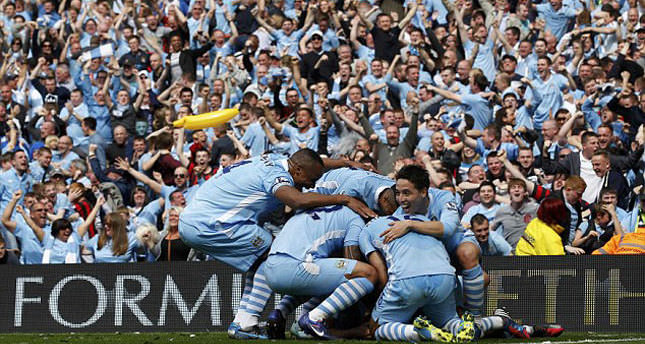 by May 11, 2014 12:00 am
LONDON — Manchester City lifted the Premier League title for the second time in three years after a 2-0 win over West Ham United on Sunday.

Two points clear of Liverpool with a superior goal-difference at the start of the day, City needed only a draw to claim the championship but dominated the game from start to finish and were comfortable victors.

Liverpool, meanwhile, came from behind to beat Newcastle United 2-1.

Samir Nasri put City ahead six minutes before half-time, his shot from 25 yards beating Adrian to the goalkeeper's right.

At Anfield, Luis Suarez had the ball in the net after 17 minutes but it was ruled out after the referee ruled he had taken a free-kick from the wrong place.

Two minutes later, Martin Skrtel sliced a Yoan Gouffran cross into his own net - his fourth own goal of the season - and it took a superb save from Simon Mignolet to prevent Gouffran doubling Newcastle's lead.

Daniel Agger turned in a Steven Gerrard free-kick to level after 63 minutes and two minutes later an almost identical free-kick teed up
Daniel Sturridge for a second.

Newcastle forward Shola Ameobi was promptly sent off for dissent in his final game for the club and Paul Dummett followed him in the final seconds for a foul on Suarez.

Tottenham Hotspur made sure of Europa League qualification with a 3-0 win over Aston Villa in what was probably Tim Sherwood's last game as manager.

Paulinho put Spurs ahead after 14 minutes following in the rebound after Brad Guzan had saved his initial effort and when Nathan Baker
deflected an Emmanuel Adebayor shot into his own net after 35 minutes it was 2-0.

Adebayor made it three from the penalty spot three minutes later.

Manchester United finished the season with a 1-1 draw at Southampton.

Rickie Lambert put Southampton ahead after 26 minutes after running onto Steven Davis's pass, but United were furious, believing Lambert had elbowed Nemanja Vidic in the build-up.

Juan Mata curled in a free-kick to level.

Norwich City's relegation was confirmed as they went down 2-0 at home to Arsenal. Aaron Ramsey volleyed Arsenal into the lead and Carl
Jenkinson added the second.

A late Charlie Adam goal gave Stoke City a 2-1 victory at West Browich Albion. A Gareth McAuley own goal midway through the first half gave Stoke the lead, before Stephane Sessegnon equalized.

Relegated Cardiff City took the lead against Chelsea after 15 minutes with a deflected Craig Bellamy shot, but second half goals from Andre Schuerrle and Fernando Torres gave Jose Mourinho's side a 2-1 win.

Fulham bade farewell to the Premier League with a 2-2 draw against Crystal Palace.

Dwight Gayle put Palace ahead after 28 minutes but Cauley Woodrow levelled with his first Premier League goal. Gayle restored the away
side's lead with free-kick but Chris David levelled in injury-time.

Hull City warmed up for next week's FA Cup final with a 2-0 defeat to Everton. James McCarthy struck after nine minutes and Romelu Lukaku added a second just after half-time.

Sunderland, having secured their Premier League future on Wednesday, were comfortably beaten 3-1 by Swansea.

Goals form Nathan Dyer and Marvin Emnes had the Swansea two up by half-time. Fabio Borini headed one back but Wilfried Bony restored
the two-goal margin.