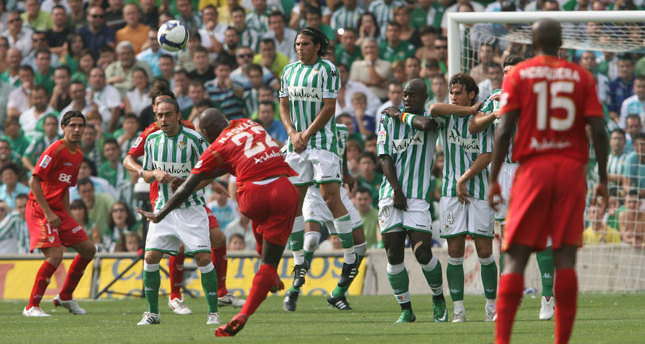 As the European football season comes to close, Portugal's Benfica and Spain's Sevilla look to face off in the UEFA Europa League final

LONDON — Sevilla will be Benfica's opponents on the field in Wednesday's Europa League final yet many of the Portuguese team's fans believe that other forces will be at work as they attempt to win their first European trophy for 52 years. After winning the old European Cup in 1961 and 1962, Benfica have gone on to play in seven more European finals and lost them all, a run of failures which many blame on the socalled "curse of Bela Guttmann."

Guttmann was the Hungarian coach who led Benfica to their two European Cup wins, but on leaving the club in acrimonious circumstances he declared: "Benfica will not win another European final without me." Lo and behold, Benfica went on to lose finals to AC Milan (1963), Inter Milan (1965) and Manchester United (1968). Guttmann died in 1981, yet the run of defeats continued as they lost further European Cup finals to PSV Eindhoven (1988) and AC Milan (1990), and UEFA/Europa league finals to Anderlecht (1983) and Chelsea last year.

The late Eusebio famously prayed at Guttmann's grave in Vienna, asking in vain for the curse to be broken, and in February, the club unveiled a statue of Guttmann in front of the Stadium of Light, something many observers saw as another attempt to break it.
Underneath the statue is a quote from Guttmann himself which reads: "Only those of us inside Benfica know what mystique really is. There is no other club in the world with a mystique like Benfica's."

Coach Jorge Jesus, however, said that experience, hard work and tactics would decide the final at the Juventus stadium. "I'm not superstitious," he told reporters. "I believe in people's value and the quality of their work. I believe that the best team does not always win in a final and I also believe that we can be better than Sevilla and win this match. "It's the second time we are in one of these finals. We have a better idea of how to deal with the anxiety."

Sevilla, on the other hand, have played in two European finals and won them both, beating Middlesbrough in the 2006 UEFA Cup final and Espanyol the following year. "We all thought that Juventus would win this championship. We all know about Benfica and their potential and we've seen that they have knocked out Juventus and Tottenham along the way," Sevilla coach Unai Emery said, suggesting that his side were underdogs.

Fifth in La Liga, Sevilla have had a long, nerve-wracking 18-match route to the final which began at home to Montenegro's Mladkost Podgorica on Aug. 1. They won a penalty shootout to beat neighbours Real Betis in the round of 16 and then scored an injury-time goal to beat fellow Spaniards Valencia on away goals in the semi-finals.

Benfica parachuted into the competition's knockout stage after being knocked out of the Champions League, something which many feel devalues the Europa League. They have played only eight matches in the competition and are unbeaten.

Benfica have bounced back from a disastrous end to last season, when they lost the Europa League final, Portuguese Cup final and were pipped by Porto for the league title, and are on course for a domestic treble.

The Eagles, who boast a large contingent of South American players, have already won the league and League Cup and face Rio Ave in the Portuguese Cup final on Sunday. "We are in the final on merit and we deserve everything that is happening to us," said Jesus, who barely survived last season's collapse and is now lauded as one of the country's top coaches.