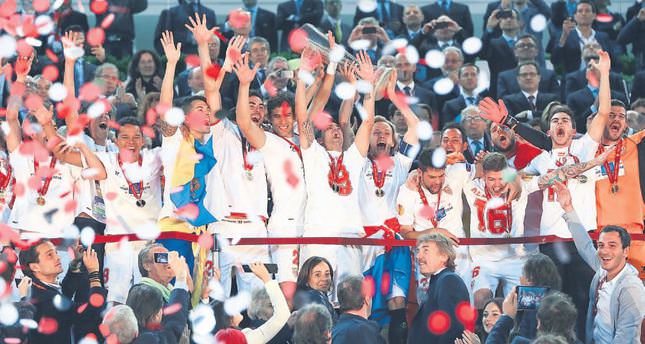 TURIN — Sevilla goalkeeper Beto saved two penalty kicks from Benfica forwards Oscar Cardozo and Rodrigo who failed to deceive with stutter-step approaches to the ball. Substitute Kevin Gameiro stepped up to score the decisive kick as the drama played out at the end housing Sevilla fans.

The Portuguese champion had dominated regulation time but was denied by key blocks from Sevilla defenders, and had several appeals for penalties denied by German referee Felix Brych in the second half. Sevilla, which won the competition for the third time in nine seasons, ensured Spain will sweep the season-ending European club competitions, with Real Madrid and Atletico Madrid meeting in the Champions League final on May 24.

Next month Spain will defend its World Cup crown in Brazil and seek to clinch a record fourth straight major international trophy after winning the European Championship in 2008 and 2012.

Benfica extended its streak of losing European finals to eight matches over 52 years since its greatest player, Eusebio, inspired two straight European Cup titles in 1961 and '62.

Four months after Eusebio died aged 71, the Lisbon club missed another chance to end the unwanted record. The match kicked off with patches of empty sets in the stadium of Italian champion Juventus, which was denied a home final by Benfica in the semifinals.
Three early opportunities for Sevilla broke down for Carlos Bacca's lack of finishing. The Colombia forward failed to shoot when collecting a pass across the goalmouth, drifted offside in a fast break started by captain Ivan Rakitic, and then could not connect with Rakitic's angled low cross.

A testy spell midway through the half lacked creativity, and even Rakitic's shot from the center circle drifted well wide of goal. Benfica ended the half strongly, aided by loose play in the heart of Sevilla's defense. Sevilla relied on Beto for a double save, swatting away Maxi Pereira's looping shot from close range and then parrying Rodrigo's low drive.

Benfica claimed a penalty when Nicolas Gaitan fell under pressure from defender Federico Fazio who poked the ball barely wide of his own goal. Poor positional play by Sevilla defenders in the 48th was redeemed by three crucial blocks in the goalmouth as Lima, twice, and Rodrigo fired shots from 10 meters (yards).

Sevilla needed another saving tackle in the 72th, when Coke denied Lima as the Brazilian shaped to connect with Maxi Pereira's lateral pass. Benfica again finished the half on top, and Beto leaped to tip over Lima's shot in the 84th.

When Beto then lost a deep cross, defender Ezequiel Garay headed over an empty Sevilla goal as the scoring chances continued to go begging. Bacca could have won it for Sevilla when breaking clear in the 101st minute but his rising shot flashed just wide. But Bacca, like his teammates, made no such mistake from the penalty spot in the shootout as Sevilla repeated its success on spotkicks in the 2007 UEFA Cup final against Espanyol.
Last Update: May 16, 2014 1:34 am
RELATED TOPICS