Solidarity on the pitch 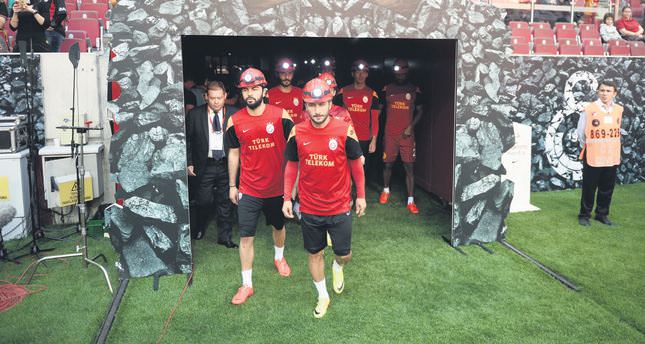 by Daily Sabah May 19, 2014 12:00 am
ISTANBUL — Galatasaray football players enter the pitch wearing mining hats before their game against Kayseri Erciyesspor on Saturday in memory of the miners who lost their lives in last week's mine accident in Soma.

The tragic mining accident that took the lives of 301 miners in Soma dug deep wounds into the Turkish nation. Over the weekend Turkish sports clubs tried to do their part in honoring the lives of those that passed away and gather resources to help make amends. In the Turkish Basketball League playoff match between Galatasaray Liv Hospital and Beşiktaş Integral Forex both clubs saluted the mine workers by holding mining hats above their hearts for a moment of remembrance before the match tipped off. In the Spor Toto Super League football match at the Türk Telekom Arena between Galatasaray and Kayseri Ergiesspor Galatasaray's football team offered their condolences as well. The club placed a graphic of a coal mine at the entrance of the locker room tunnel and turned out the lights as the Lions took to the center of the pitch wearing mining hats.

Fenerbahçe and Beşiktaş together announced that they would host a friendly match derby, the full proceeds of which will be given to the families of the Soma miners. The details of the friendly match will be made public later this week in a shared press conference. Beşiktaş club president Fikret Orman went to Soma to visit the families of the departed miners and the hospital where those that were rescued with injuries are currently being treated. Later in the day Orman announced that the club are planning to build a residential complex to aid the families of those that lost their lives. "We know it is not possible to heal the pain of the tragedy. But we at Beşiktaş want to do our part in assisting."

Fenerbahçe also announced that they were gathering funds to help the continued education of the children who lost their fathers in the mine. The Yellow Canaries announced that they would allot TL 1.8 million to five year scholarships to 100 children. Former Fenerbahçe player Tümer Metin also offered his condolences by paying the entirety of the debts of a miner who's story moved him. Metin, whose father was a coal miner in the Turkish province of Zonguldak, met with the miner cleared him of his debts. Didier Drogba, whose departure from Galatasaray was confirmed by the club spokesperson Şükrü Ergün, also announced that he would donate one million euros to the families of the miners.
Last Update: May 19, 2014 1:09 am
RELATED TOPICS