US raise World Cup hopes with 2-1 win over Turkey 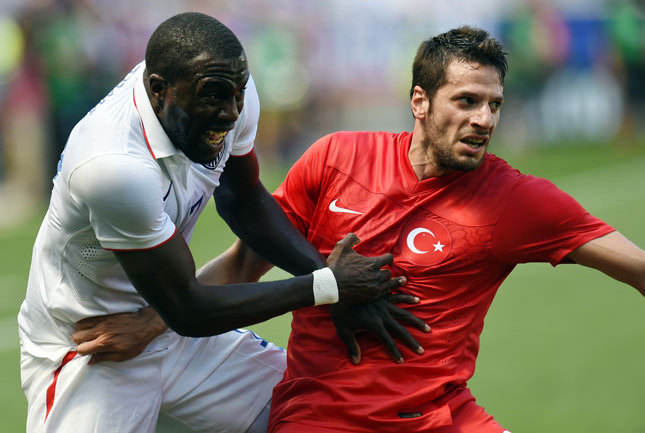 by Jun 01, 2014 12:00 am
HARRISON, New Jersey — The United States continued their solid build-up to the World Cup with a 2-1 win over Turkey on Sunday, raising expectations of a good showing in Brazil. Defender Fabian Johnson combined with Michael Bradley to score a superbly executed goal in the first half before Clint Dempsey added a second after the re-start.

Turkey, who failed to qualify for the World Cup, got a consolation goal in the last minute of normal time when Selcuk Inan converted a penalty after Geoff Cameron was ruled to have handled the ball in the box. Turkey were unlucky not to score earlier when their captain Nuri Sahin hit the post in the first half but had difficulty containing the Americans as the match went on.

Playing in front of a full house at Red Bull Arena in New Jersey, the U.S. showed some anxious moments in defence, allowing the Europeans to breach their last line on a handful of occasions, but held firm and looked sharp in attack. Jozy Altidore had an early goal disallowed for making contact with the Turkish goalkeeper Onur Recep Kivrak before Johnson gave the home team the lead with a spectacular goal in the 26th minute.

Bradley, the heartbeat of the American team, deftly flicked the ball over the Turkish defence into the path of Johnson who hit a perfect left-footed volley into the net for his first international goal. Dempsey gave the Americans a 2-0 lead in the 52nd minute with a typical poacher's goal, poking the ball in after Kivrak fumbled Timmy Chandler's cross from the left. Turkey got on the scoreboard in the dying moments after a mix-up in the American defence. Cameron lost the ball to Mustafa Pektemek then failed to get his arm out of the way when the Turkish substitute rifled his shot at the goal to concede a penalty.

The U.S. beat Azerbaijan 2-0 in San Francisco last week and have one more warm-up, against Nigeria in Florida on Saturday, before heading to Brazil. The Americans are drawn in Group G with Germany, Portugal and Ghana for the World Cup, starting in just over a week.