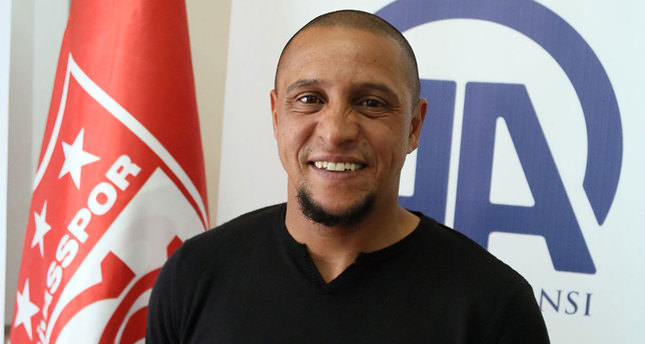 by AA Jun 05, 2014 12:00 am
SIVAS, Turkey — Brazil's second most-capped footballer after Cafu, Roberto Carlos -- currently working with Turkish top-flight side Sivasspor -- has said that Germany, Argentina and, of course, Brazil are his favorites in the 2014 FIFA World Cup.

Speaking to Anadolu Agency in Sivas Thursday, Carlos -- capped 125 times for the five-time World Cup champions -- said he believes Brazil will qualify for the next round by overcoming Croatia, Mexico and Cameroon but discounted recent winners Spain, claiming their system had been "found out" by rivals.

However, he pointed out that Brazil will meet Croatia in the opening match, warning that host nations have had difficulties in the first match of World Cup tournaments.

Brazil will be the host nation for the second time in the tournament's history, 64 years after the 1950 World Cup.

Carlos claims that contest was a strange one for them since they lost in the final but after that day Brazil changed and developed so much "so spectators will witness a joyous tournament this year."

Carlos, who will be work a pundit for Brazilian TV during the competition, stated that he does not support goal-line technology "as football is not a mechanical game."

The former international added his regrets that Turkey did not qualify for this World Cup.

"In 2002 Turkey was a very powerful team. We won two matches against them but they were not so easy. Surely, that is a very sad thing for a country like Turkey, which is very passionate about football, trains many good footballers and makes progress in football", said Carlos.

Despite tipping the likes of perennial contenders like Germany and Argentina, the Brazilian warned fans to watch out for one surprise outfit – Russia.