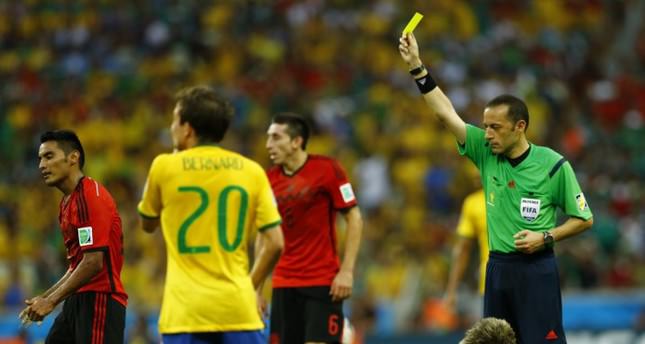 As Brazil's opening match saw the biggest refereeing controversy of the tournament, all eyes were on Turkish referee Cüneyt Çakır as he worked Brazil's match against Mexico, incurring little criticism

When FIFA appointed Turkish referee Cüneyt Çakır to officiate host nation Brazil's match against Mexico in Fortaleza on Tuesday, both the Brazilin and Mexican sides had doubts about him. However, Çakır demonstrated his competency during Brazil's second Group A match against Mexico at the Castelao on Tuesday. Çakır, who is considered one of the best UEFA referees, tried to avoid showing cards as much as possible, with only two players from both teams receiving bookings. At the 88th minute, Çakır did not award a penalty kick when Marcelo fell down within the penalty area, not allowing the diving Brazilian player to deceive him. Assisting referees Bahattin Duran and Tarık Ongun also did not make any mistakes on offside calls. Çakır's work during the game also raised his chances of refereeing other important matches later in the tournament. After Japanese referee Yuichi Nishimura's decision to award a penalty to Brazil in the opening game, all eyes were on Çakır at Brazil-Mexico game.

Separately, those who thought the World Cup host or world champion Spain thumped 5-1 last week by the Netherlands would walk away with this should think again. Proving the old adage that there are no easy games in football's showcase, Brazil failed to beat Mexico for the first time at the World Cup and were held Tuesday to a 0-0 draw in their second game in Group A. Belgium a longshot pick for the title also struggled to break down Algeria, but got help off its bench to win 2-1 in Belo Horizonte. In steamy Cuiaba, an evenly matched and entertaining back-and-forth contest ended Russia 1, South Korea 1. Substitutes scored all but one of the five goals on Tuesday, proving the importance of having a Plan B. All 32 teams have now played at least once. The Netherlands and Germany, which scored four Monday against Portugal, are the standouts so far. With Los Angeles Lakers star Kobe Bryant in the crowd of 60,342, Tuesday's big surprise was Brazil's failure to find the net in the northeastern city of Fortaleza. With Neymar rampant through the middle, Marcelo ever-willing to go forward and Oscar supplying passes and inventiveness, Brazil should be able to score almost at will. Time and again, Brazil's yellow shirts swarmed over Mexico's penalty box. But shots and passes went awry, Mexican goalkeeper Guillermo Ochoa made outstanding saves and Brazil is clearly missing a top-notch center-forward.

Other attackers Thomas Mueller for Germany, the Netherlands' duo of Robin Van Persie and Arjen Robben, France's Karim Benzema all bought their scoring boots to Brazil, finding the net at least twice. Neymar also got two for Brazil in its opening 3-1 defeat of Croatia. But his teammate Fred is yet to get off the mark. Mistiming his run, the striker had a first-half effort disallowed on an offside call, didn't weigh heavily on the game and was substituted in the second half. This was the second scoreless draw at this tournament, where goals have rained in. If goal scorers struggled Tuesday, it was also because goalkeepers had a good day. Before Tuesday, the first 14 matches saw an average of more than three goals per game bettering the rate of all World Cups since Brazil's first victory in 1958. But that dipped to 2.9 goals per game following Tuesday's three matches. Ochoa's seven saves in the tournament, six of them against Brazil, are the most by any goalie so far. He got an outstretched hand to Neymar's superb first-half header. After another spectacular two-handed reflex save in the second half, batting away Thiago Silva's header, Ochoa high-fived a teammate.