Why so many goals at the World Cup? 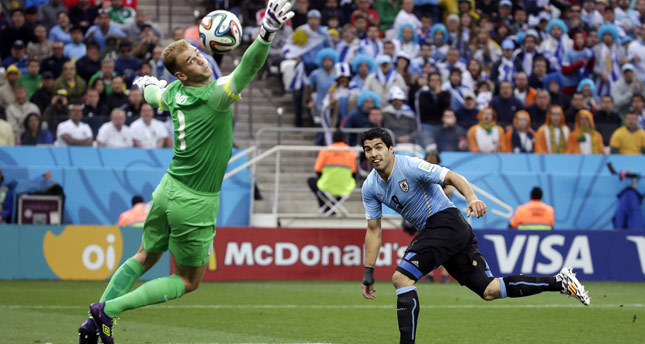 After a steadily diminishing goals-pergame ratio at recent World Cups, the 2014 tournament has bucked the trend in spectacular fashion. So far, the 2014 World Cup has provided goals on a scale unprecedented in this generation. The average goals per game stood at 3.14

A week into the competition, the average number of goals scored per game is just under 2.9, leaving the tournament on course to become the most high-scoring World Cup since the 1958 event in Sweden (3.6). Here, AFP Sports identifies six factors behind the unexpected goal explosion:

The legacy of 'tiki-taka':

Spain's tournament may have been ended by Chile on Wednesday, but the defending champions' six-year reign as the world's pre-eminent national team has had a profound impact on the way that teams play. The "tiki-taka" passing style pioneered by Spain and Barcelona has been copied around the world, with proactive, attacking football and aggressive pressing now widespread. The example set by players such as Xavi and Andres Iniesta means that players have become accustomed to taking more risks in possession, which leads to more turnovers, and in turn, more goals.

Compared to the cold weather of South Africa, where the 2010 World Cup took place, games in tropical and sub-tropical Brazil have in mainly taken place amid warm conditions.

The heat and humidity means that players tire more quickly and when players get tired, they make more mistakes. "Certainly [the conditions] are playing a part," said Australia coach Ange Postecoglou, quoted by the Daily Telegraph. "It's contributed to the openness of the competition, because games get spread in warmer climates. That's why you've seen some pretty open games."

It took Brazil defender Marcelo only 11 minutes to put the ball into his own net in the tournament's opening game, the host's 3-1 win over Croatia, and early goals have become a recurr i n g theme. There were 25 first-half strikes in the tournament's first 20 matches, and nothing opens a game up like an early goal. Already, seven teams have come from behind to win matches. Only four managed the feat at the 2010 tournament.

While the 4-2-3-1 formation was the dominant playing system at the last World Cup, teams have enjoyed success in Brazil with more idiosyncratic tactical configurations.

Holland's 5-3-2 system enabled them to crush Spain 5-1 as it gave Louis van Gaal's side numerical parity in midfield whilst allowing forwards Arjen Robben and Robin van Persie to remain high up the pitch. "The fact that our defence plays very deep frees up a lot of space for Robin and me," explains Robben. "We have the whole pitch for leading counter-attacks." After a seemingly ineluctable slide towards single-striker systems in recent years, more and more teams are playing with two central forwards, and more forwards often means more goals.

Fans in Brazil have already witnessed some exquisite goals - Van Persie's looping header against Spain; Tim Cahill's jaw-dropping volley against Holland; Lionel Messi's solo special against Bosnia-Hercegovina - but standards of goalkeeping have been less impressive.
Spain's Iker Casillas made two woeful errors against Holland, while Russia's Igor Akinfeev and Mathew Ryan of Australia have also committed high-profile blunders. Several leading nations have problems in the goalkeeping department Brazil's Julio Cesar and Argentina's Sergio Romero are both short of match practice, while Italy's Gianluigi Buffon missed his side's opening game through injury - so it could prove a tournament to forget for the men between the posts.

The early-tournament goal spree is encouraging teams to throw caution to the wind, creating a climate where risk-taking is applauded and defensive play derided. "I'm surprised how open it's been," admits England striker Daniel Sturridge. "It's been quite open and, for the neutrals, it's a great World Cup to see, with so many goals and chances. I'm enjoying it, enjoying the occasion - watching games as well as playing."
Last Update: Jun 20, 2014 11:05 pm
RELATED TOPICS