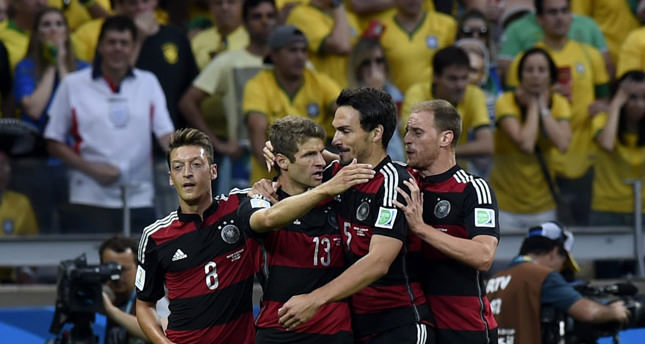 by Associated Press Jul 08, 2014 12:00 am
The Brazil squad entered the field carrying Neymar's No. 10 shirt ahead of Tuesday's semifinal against Germany not expecting to go down 5-0 in the first 30 minutes.


Miroslav Klose became the World Cup's all-time top-scorer after netting his 16th goal in the competition in Germany's first-half semi-final rout of Brazil.

Toni Kroos then added two more in as many minutes to incredibly put the Germans 4-0 up before Sami Khedira added a fifth on the half hour mark.
Klose had matched Brazilian legend Ronaldo's record of 15 World Cup goals when he scored the equaliser in Germany's 2-2 draw with Ghana in the group stages.

Sam Khadira added to the damage scoring in the 29th minute. The final score ended 7-1 in a crushing defeat against the home team Brazil.
This is Klose's second goal-scoring record in just over a month after he broke Gerd Mueller's previous mark of 68 goals to become Germany's top scorer in a 6-1 pre-World Cup friendly win against Armenia.
Last Update: Jul 09, 2014 1:18 am
RELATED TOPICS