Prandelli in Istanbul with his assistants 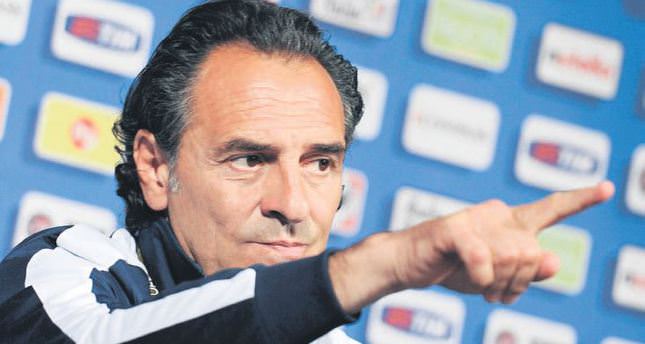 by Daily Sabah Jul 08, 2014 12:00 am
Former Italy manager Cesare Prandelli came to Istanbul yesterday to sign a two-year contract with Turkish football giant Galatasaray. Prandelli, who arrived to Istanbul on a private plane charted by Galatasaray Chairman Ünal Aysal, brought his five assistants with him.

He will sign the contract today and begin work immediately . "Tomorrow morning [today] at the Florya Metin Oktay [training] facilities, he will be introduced to the players and staff," the club said in a statement in Turkish on its website (www. galatasaray.org). Prandelli is one of the few high-profile managers that has a female assistant manager. Silvia Berti will be responsible for communication for the team. Turkey coach Fatih Terim also had a female assistant on his staff during his time with Galatasaray. Duygu Erdoğan, who was a coach in the football Galatasaray, also joined the A team practices.

Prandelli, 56, will succeed fellow Italian Roberto Mancini, who left the club after less than a season in charge after leading the Istanbul side to a disappointing second- place finish in the Turkish top-flight last season. Former Manchester City boss Mancini had signed for three seasons but left after what appeared to be a difference of opinion. He guided them to the Champions League round of 16 at the expense of Juventus and victory in the Turkish Cup final. Prandelli resigned as Italy's national team manager after the team failed to get past the group stage at the ongoing World Cup in Brazil. He had been in charge of the Azzurri since 2010, having previously coached Fiorentina, Roma and Parma. Media reports had also linked former Everton and Manchester United manager David Moyes as a candidate for the post.
RELATED TOPICS