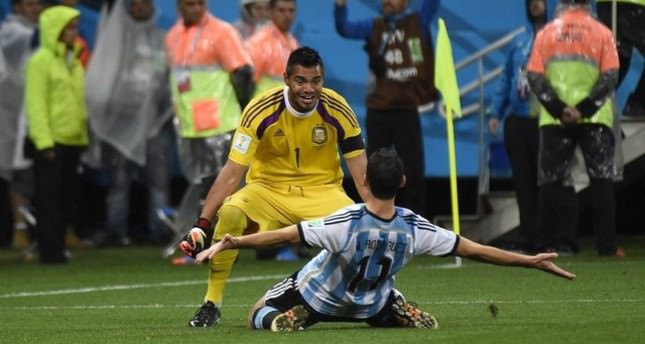 Gunning for their third World Cup win, Argentina will match up against the irrepressible Germans in what could be a final for the ages

The names on the scoreboard will be the same as they were back in the 1990 World Cup final but the two teams are very different. The final 24 years ago was the definition of a snooze-fest remembered now only for Jurgen Klinsmann's egregious dive and Andreas Brehme's nerveless penalty. No one will be looking for a repeat of that final. Fortunately, the two teams that will lineup on Sunday evening are packed with irresistible attacking talent.

Germany is no longer the robotic Teutonic knights of 1990, rather a band of supremely gifted and inventive players with an in-built desire to get
forward in numbers. The 1990 final has Diego Maradona but this final has Lionel Messi, a player who can surpass the aforementioned diminutive wizard with a win in the Maracana.

Argentina still carries some of the pragmatism of their counterparts from 24 years ago but possesses a greater abundance of attacking flair and, fortunately, none of their predecessor's agricultural defensive techniques.

Perhaps Germany and Argentina's meeting in the final of the 1986 World Cup would be a better point of comparison. That game was decided by the individual genius of Maradona while featuring Germany's famous never-say-die attitude and ability to always score at the right time. Argentina won 3-2 28 years ago, let's hope for a similar score line.

Historic though Germany's performance was in the semifinal against Brazil, humbling the hosts with a 7-1 win, the three-time world champions will surely know that Argentina won't be quite so accommodating.

Germany took advantage of Brazil's horrendous midfield cover and Marcelo's sleepy performance at left back. Argentina however will take away those options. Marcos Rojo isn't the best left back in the world but he will not make the same mistakes as Marcelo, getting caught napping high up the pitch leaving acres of space behind him.

Neither will the midfield piranhas of Javier Mascherano and Lucas Biglia hand over space like Brazil did. The duo is compact, hardworking and both are simple ball players who rarely hand over possession cheaply. Mesut Ozil, Toni Kroos and Thomas Muller will have to work hard to eke out space in front of the Argentine penalty area.

On the other end, it's harder to predict. Germany's defense hasn't always looked the perfect fortress. Jerome Boateng, Mats Hummels and Per Mertesaker are all experienced campaigners and quality players but they can also be exposed. Boateng's pace will be crucial in making up space if and when Argentina get behind the German back line. In Sergio Aguero, Gonzalo Higuain, Ezequiel Lavezzi and Lionel Messi, Argentina have the world's most formidable attacking personnel.

Higuain is a master opportunist but won't trouble Germany's center backs for much of the game. The compactness of their midfield and full backs should stop most of the darting runs from Argentina's wings.

If that sounds worryingly ominous ahead of the game, don't worry, it only sets stage for Messi to put in the match-winning performance that he is so capable of and that so many people want to see.

Will Germany break down Argentina or will a diminutive maestro have the final word?

Lionel Messi vs Germany's deep midfield As shown against the Netherlands, Messi can be a major contributor without even touching the ball. No one player will be given the assignment of stopping the tricky superstar - a job beyond any individual - rather Germany will have to surround the Barcelona man the moment he takes possession. Messi presence alone creates a host of opportunities. If Germany does indeed swarm the Argentina captain, quick release passes out wide or down the center could catch Germany cold and launch a rapid attack. The attention he gains also prevents Germany from sending all of their men forward at once. The neutral wants to see the final decided by some Messi magic, but his impact could be more subtle.

Kroos may not be Messi but he is a supremely talented midfielder. Like Messi, he can contort a defensive shape to its breaking point with his savvy movement and quick passing. Although no one Germany player can be credited with the stunning win over Brazil, Kroos was perhaps the most influential player, taking advantage of space with his passing and running, as well as netting two superb goals. Mascherano is arguably the best destroyer out there and he won't give Kroos a moment's peace.

Muller has already made himself a World Cup legend with his stunning goal return of 10 goals over the previous two World Cups. Not particularly quick, not particularly skillful, Muller makes his money with perfectly timed ingenious runs as well as ruthless finishing.

He is one of the cleverest attackers in the world and Rojo will need to be alert all game. Big games can be decided by one moment of opportunism, the kind of opportunities Muller was born to take advantage of. The left back had a relatively comfortable time against Holland, who played Dirk Kuyt at wing back. Muller doesn't lose concentration so neither can Rojo.