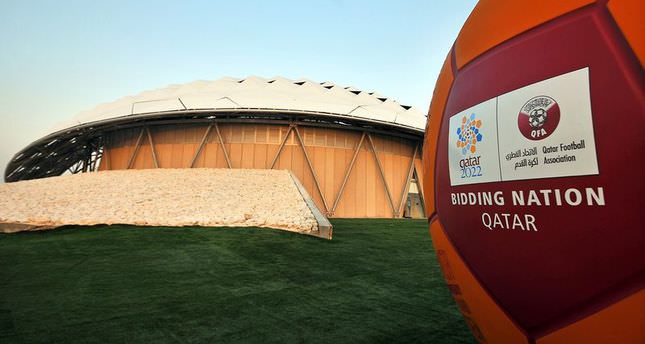 by Jul 16, 2014 12:00 am
The 2022 World Cup will take place as planned in Qatar and the country has nothing to hide over allegations of corruption during the bid process, the tournament communications director Nasser Al Khater said on Wednesday.

"We've held ourselves to the highest ethical standards. We are confident of how we've behaved," Al Khater said on Al Jazeera television. "We are not worried. The World Cup will take place in Qatar."

Al Khater said his country would comply with the FIFA investigation into possible bid corruption but stressed Qatar had nothing to hide.

"Qatar is part of the investigation and so is Russia (2018). The whole process is part of that. It's unfortunate that people single out Qatar every time they discuss it," he said.

He also distanced himself from disgraced former FIFA executive Mohamed Bin Hammam, saying he was not representing the Qatar 2022 Supreme Committee in the bid process.

FIFA president Sepp Blatter said before the Brazil World Cup that it may have been a mistake to award the tournament to Qatar due to the intense heat in the summer, when temperatures can reach up to 50 degrees Celsius, and winter may be a better option.

Al Khater said either way his country can host the World Cup in the summer or winter.

"We are waiting on a task force to come back and make recommendations. Our plans won't change, we are going to be ready whether it is the winter or summer," he said.

He added that his committee was also doing everything it could to make working conditions safe in Qatar following criticism from Amnesty International and Human Rights Watch on the alleged mistreatment of migrant workers, mostly from Nepal and India.

Al Khater said the 2022 World Cup would be a celebration and truly a Middle Eastern affair.

"These two billion people are going to be from various cultures, various ethnicities, various people from different parts of west Asia, the Middle East, north Africa and I think it is going to be rich and vibrant," he said.