Prandelli to fast on the last day of Holy Ramadan 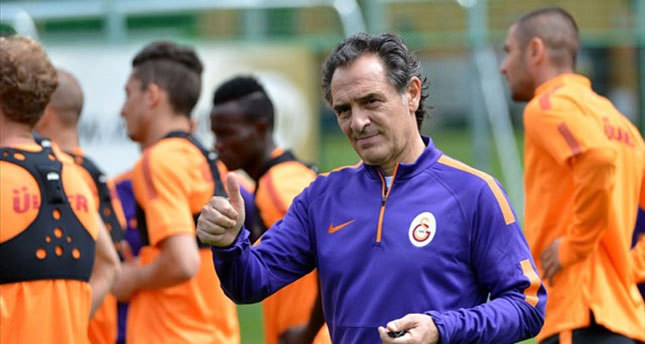 by Daily Sabah Jul 23, 2014 12:00 am
Galatasaray's new coach Cesare Prandelli said he intended to fast on the last day of Ramadan. Speaking to Turkish press in Austria preparation camp, the Italian coach admitted he intends to learn more about the holy month. Prandelli obtained information from Turkish journalists about Ramadan and he said, "I will fast on the eve of Eid". Prandelli also said he has been trying to learn Turkish and he would live near to Florya Metin Oktay Facilities. "When I was in Brazil for the World Cup tournament with the Italian national team, Felipe Melo sent me a jersey and it made me very happy" he said.

Prandelli also showed a picture of his son wearing Galatasaray's jersey on his phone to the press members. Prandelli called Melo "a very special player" and said, "I was very surprised that he had not been invited to the national team." Cesare Prandelli emphasized that Galatasaray's Chairman played an important role for his preferring Galatasaray. "He looks me in the eye when we are talking. This is very important to me. I saw the desire for success in his eyes and it convinced me to go to Galatarasay." He refused the journalist request to take a photograph with the Galatasaray jersey with four stars, saying "We, Italians, first do our job and only when we reach the success, show it to others."
Last Update: Jul 23, 2014 1:00 am
RELATED TOPICS