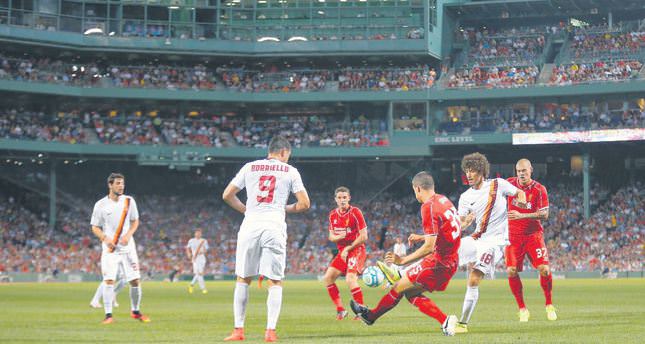 by Associated Press Jul 25, 2014 12:00 am
Italian club AS Roma beat Liverpool 1-0 on Wednesday in a friendly match in Boston as the world's biggest clubs begin their summer pre-season programs.

Turkish star Salih Uçan made an impression on his debut for the Italians with a dynamic performance after entering the game in the 62nd minute. Marco Borriello was the only man to get on the scoresheet at Fenway Park, netting from a corner in the 90th minute.

There were limited chances until Borriello volleyed in a corner from in front of goal. "Both teams played with young players," Roma coach Rudi Garcia said. "I am quite happy with the development we had." Roma were able to showcase new signings including Uçan, English left-back Ashley Cole, Argentinian stars Juan Iturbe and Leandro Paredes and Dutch left-wing back Urby Emanuelson. For the second time in three years, Fenway park, the home of the Boston Red Sox, was transformed into the home of Liverpool, which is owned by Fenway Sports Group.

John Henry, owner of the Red Sox, is also the controlling partner of Fenway Sports Group. Roma goalkeeper Lukasz Skorupski made a diving save near the post after Rickie Lambert's effort from just outside the box in the 57th minute. Roma seemed to have the territorial edge in the first half and Liverpool enjoyed a slight edge in the second in a match that had just a handful of shots on goal. Liverpool rested a number of its star players, including captain Steven Gerrard, but the mostly red-clad crowd didn't seem to mind. "It's going to be great for me to see our young players gain
experience," Rodgers said.

Wednesday's game was the first of four scheduled matches in the U.S. for Liverpool, which travels to Chicago, New York and Charlotte.
Last Update: Jul 25, 2014 1:05 am
RELATED TOPICS