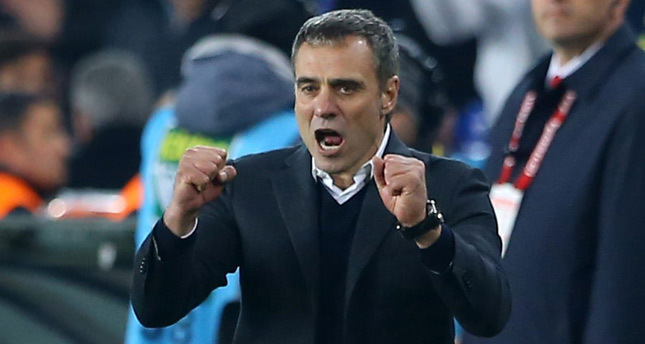 by Daily Sabah Aug 11, 2014 12:00 am
Fenerbahçe experienced a managerial crisis last week after the Turkish club parted ways with another manager, despite the man in charge winning the Turkish league championship last season. After having come into conflict with Chairman Aziz Yıldırım, Turkish Spor Toto Super League's defending champions Fenerbahce's head coach Ersun Yanal resigned from his post on Saturday. Local media reported on disagreements with between the manager and club chairman Aziz Yıldırım.

It is alleged that Yıldırım was annoyed by the miscommunication between the squad and Ersun Yanal. Yıldırım was also upset with Yanal after he had not attended the celebrations that were organized following the championship victory. The team's poor performances in pre-season friendly matches only rubbed salt in the wound and increased the tension between Yıldırım and Yanal. The Fenerbahçe administration met yesterday and discussed the matter of a new manager. The most likely candidates are believed to be Roberto Carlos, Aykut Kocaman, Mustafa Denizli and Zico. In a statement to the Anadolu Agency, Yanal said: "It's impossible to maintain my job in these circumstances as a head coach."

He added that it had been a great honor to manage Fenerbahce and thanked the fans, board, media and sports community for supporting him last season. Yanal, 52, went on, "Principles are superior to the money that we earn and they are indispensable for success as well." Last season's Spor Toto Super League winners ended a two-season league-winning streak by arch-rivals Galatasaray. Yanal is the third manager to have won the league before parting ways with the club. Brazilian Carlos Alberto Parreira and Turkish coach Mustafa Denizli are the other two.
Last Update: Aug 11, 2014 1:56 am
RELATED TOPICS