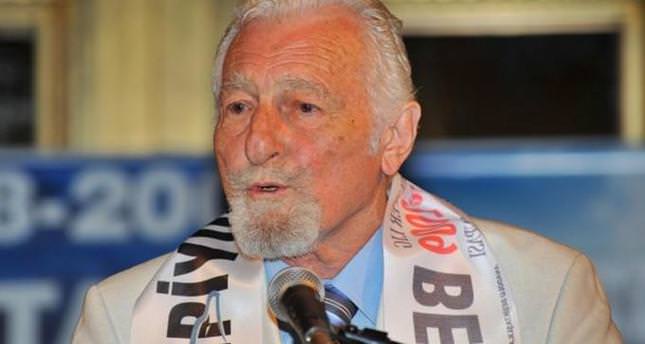 Süleyman Seba, who passed away at age 88, was both a Beşiktaş and Turkish football legend, gaining the respect of everybody throughout the years

Turkish multi-sport club Beşiktaş JK's honorary president Süleyman Seba, who was undergoing treatment for his respiratory tract infection, died at the American Hospital in Istanbul on Wednesday. Beşiktaş JK released an official statement with the headline "Our pain is great! We have lost our honorary president Süleyman Seba." The statement also cited the following: "Süleyman Seba, the most important figure of Beşiktaş attitude will from now on live in the hearts of all Beşiktaş JC community. His memory will never leave our minds."

A former Beşiktaş player, Seba was known to be a "football gentleman," whose dedication for his club and efforts to promote friendship in the game were appreciated not only by the Beşiktaş community but also supporters of rival clubs. Süleyman Seba is widely regarded as one of the legends of the club mainly due to his devotionally sportsmanlike attitude during his term as the chairman of the Istanbul club between 1984-2000. He was born on 5 April 1926 in Soğuksulu, a village in the Sakarya Province of Turkey. Sent to Istanbul by his father to receive a better education, Seba attended the prestigious Galatasaray High School in the Beyoğlu district before going on to Kabataş High School on the Bosphorus, another prestigious historic Turkish high school, in the Beşiktaş district. Seba later enrolled into Istanbul University's Faculty of Literature, but due to his football career he never graduated. Seba started to play football in the Kabataş High School team. The promising player was soon discovered by the local football club Beşiktaş JK and admitted to its junior team. With his contribution, the junior team became the champions in his first season, and Seba was promoted to the rank of team captain a short time later.

In 1945, he was called to become a member of the A-team. Seba went down in Turkish football history when he scored the first ever goal in Beşiktaş JK İnönü Stadium against the Swedish side Allmanna Idrottsklubben during the inauguration match of the venue in 1947. In 1954, he was forced to retire from his career as a footballer due to a meniscus injury. Throughout his entire professional career he played only for Beşiktaş JK. In 1957, Seba became an active member of Beşiktaş JK. Six years later, in 1963, he became a member of the club's Presidential Council. Süleyman was elected president of Beşiktaş in 1984 by recieving more votes than the president of the club at the time, Mehmet Üstünkaya. He also had the support of Beşiktaş legend, "Baba" Hakkı Yeten, at the time of the election. That election result was an important result in Beşiktaş's history as Süleyman Seba went on to be president for 16 years, accomplishing many things during his presidential tenure. Beşiktaş won five League championships, four Turkish cups, five Presidential cups, two Prime Minister cups and six TSYD cups with Seba as president. Beşiktaş won a total of 22 cups with Süleyman Seba as president.

His presidential tenure ended in 2000 after he decided not to run for president. During his presidential tenure, Süleyman Seba had a famous quote after losing a championship to Galatasaray in the 1992-93 season and ending second place that is still in the head's of Beşiktaş fans today. He had said; "An honorable second place is better than a dirty championship." During the elections of 2000, Seba declared that he would not run for another term. Seba is still one of the most respected figures (and the honorary chairman) of Beşiktaş JK which became a financially strong club thanks to his efforts - far stronger than the practically bankrupt club which he took over in 1984. A funeral ceremony will be held for Seba at Beşiktaş's Vodafone Arena at 11:00 a.m. today.
Last Update: Aug 15, 2014 2:04 am
RELATED TOPICS