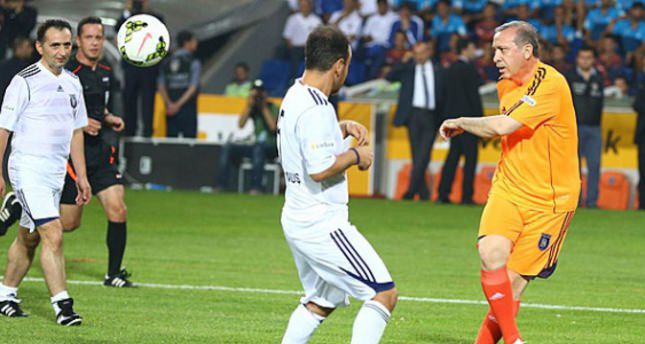 by Daily Sabah Sep 08, 2014 12:00 am
It wasn't only politics on the agenda in the bilateral talks between Turkey's President Recep Tayyip Erdogan and British Prime Minister David Cameron at the NATO Summit in Wales on September 5-6. Cameron brought up the ceremonial football match in July which saw Erdogan score a hat-trick. Attending the opening ceremony of the Fatih Terim Stadium in Basaksehir, Istanbul on July 27, then-Prime Minister Erdogan scored three goals and his second goal, a long range chip, was especially praised by both his supporters and his opponents.

Cameron also stated his admiration for the goal scpred by Erdogan and reportedly joked, "Will you give a hand in our national team, too." Erdogan, who is a former semi-professional footballer, had played a friendly game with Turkish celebrities at the opening ceremony of the Fatih Terim Stadium in Basaksehir. Erdogan saw his team fall behind 0-3 in the opening minutes of the game. But, Erdogan's goals brought the score to 3-3 in 15 minutes. According to Turkish football commentators, Erdogan's performance and the goals he scored were "impressive." His style was likened by some on social media to former German football star Franz Beckenbauer and Barca star Lionel Messi.