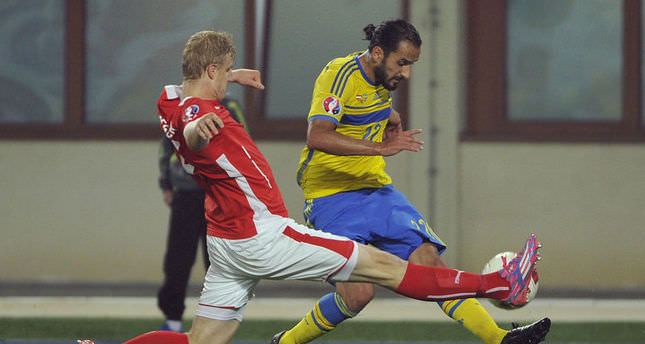 by Anadolu Agency Sep 10, 2014 12:00 am
Sweden midfielder of Turkish origin Erkan Zengin scored his first international goal to help his team draw 1-1 with Austria in a European Championship qualifier on Monday. Zengin controlled the ball on his chest before hammering it past goalkeeper Robert Almer in the 12th minute to level the score. Shortly after scoring, Zengin came close again with another thundering strike past Almer though the ball hit the crossbar. David Alaba had given Austria the lead five minutes earlier, scoring from the penalty spot after Sebastian Larsson blocked an attempted cross from the Austria midfielder with his arm. Elsewhere, in Group G, Russia beat Liechtenstein 4-0 to lead in the opening round, and Montenegro overcame Moldova 2-0. Title holders Spain and England boosted morale after their World Cup meltdowns when they started Euro 2016 qualifying with victories. Valencia forward Paco Alcacer scored Spain's second on his debut and set up Sergio Busquets for the 3-1 scoreline, with Sergio Ramos, David Silva and Pedro adding the other goals in a big 5-1 win over Macedonia in Group C. England grabbed an important 2-0 win in their Group E opener in Switzerland thanks to Danny Welbeck's double.