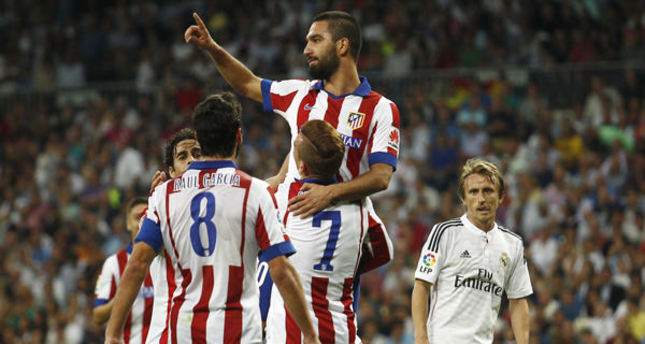 The Turkish star once said that his biggest dream was to score a goal against Real Madrid. He came off the bench to earn Atletico a hard-fought 2-1 win in La Liga derby with El Galactico

The champions of Spain defeated the champions of Europe as the balance of power in Madrid shifted again. Turkish star midfielder Arda Turan came off the bench to score the goal that took Atletico to a 2-1 victory , expertly steering it home with 15 minutes remaining. Turan's dream came true after his team Atletico Madrid crushed their archrival Real Madrid thanks to the Turkish star's goal. When Arda Turan signed with Atletico Madrid in 2012, he said, "My biggest dream is to score against archrival Real Madrid" - a dream which came true after two years.

Atletico had not beaten their neighbors in 14 years and 25 matches until they won the Copa del Rey at the Santiago Bernabeu in Madrid in May last year. They have returned twice in the league since then and won both times. They also won the league title, becoming the first team outside the big two to do so in a decade, and began this season defeating Real Madrid to win the Spanish Super Cup. Arda's goal began with a throw-in, Juanfran to Griezmann, who wriggled away from pressure and played it back to Juanfran. His low ball into the penalty area reached Raul Garcia, but instead of striking it, Garcia faked the shot and stepped over the ball, allowing it to run on to Arda Turan. He side-footed a wonderful shot on the first touch across Casillas and into the far corner. Spanish press and his teammates praised Arda Turan's performance.

Atletico Madrid's Tiago said, "Arda Turan is an excellent player." "We won thanks to Arda and Griezman's affective performance. We had more possession of the ball after they entered the game," added Arda's other teammate Godin. Atletico's Raul Garcia told journalists how the second goal was scored and said, "Arda cried behind me saying 'I'm coming, leave the ball to me'. So I opened my legs and he sent the ball perfectly."

Atletico's Argentinian coach Diego Simeone also said, "Our power stems from our hard work on the pitch. When Arda entered the game he brought us the power we needed. This is very important for our supporters." Spanish newspapers such as Marca, As, El Mundo Deportivo, El Pais and El Mundo also commented, saying, "Arda and Griezman entered, Atletico changed." The daily newspaper As said, "Arda scored a perfect goal."

Atletico's victory is very important to their supporters because Real Madrid and Atletico Madrid are clubs with contrasting identities and very different fates, a divide similar to other crosstown football rivalries such as the Manchester derby and the Milan derby, but far more skewed than the latter due to Real's sporting success compared to Atletico. Historically, Real have long been seen as the establishment club. On the other side, Atletico was always characterized by a "sentimiento de rebeldia" (a sense of rebellion) - although during the early Francisco Franco years, it was Atletico that was the preferred team of the regime, being associated with the military air force.

Franco, however, sought to make political capital out of Real's European Cup titles at a time when Spain was internationally isolated. One minister said, "Real Madrid are the best ambassadors we've ever had." Thus, Atletico fans regularly chanted that Real was "el equipo del gobierno, la vergüenza del pais" (the team of the government, the shame of the country) and allegedly adopted a more left-wing slant, tempered by the rise of ultras culture, and Rayo Vallecano's presence as the "true" leftist club in Madrid.

The Santiago Bernabeu, Real's stadium, is alongside the banks and businesses of the classy Paseo de la Castellana street, and the Vicente Calderon can be found next to the new and incredibly expensive park along the Manzanares river, near the Cathedral and the Royal Palace. Real draw greater support because of their historically greater resources and success, while Atletico claim to have a more working class fan base, which comes particularly from the south of the city.
Last Update: Sep 15, 2014 2:02 am
RELATED TOPICS