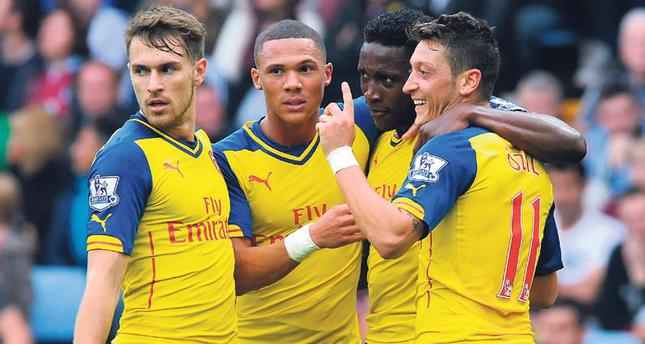 by Sep 22, 2014 12:00 am
Arsene Wenger insists he never thought about dropping Mesut Özil after the Germany midfielder finally delivered a dominant display in Arsenal's 3-0 victory against Aston Villa. Özil produced a fine finish to open the scoring from Danny Welbeck's pass and then the England striker scored his first Arsenal goal two minutes later after his team-mate had returned the favour.

Aly Cissokho's own goal made it three goals in four minutes for the rampant Gunners, but it was the influential Özil who stole the spotlight at the end of a week in which Wenger had to field questions about the former Real Madrid star's poor form following a 2-0 defeat at Borussia Dortmund in the Champions League.

Özil has been well below his best for much of his first year with Arsenal following his club record $68 million (TL 151.7 million) switch from Real, but Gunners boss Wenger was adamant he was always certain the playmaker would come good. "I never considered leaving Özil out," said Wenger, as Arsenal won for only the second time in the Premier League this season. "We have plenty of experienced players who do not play at the moment who are at top quality.

But it was the point where we had to show Özil confidence was there. He showed as well he can perform when under scrutiny. It's always a very sensitive point if you leave them out, you never know how they will respond. Özil wants to play in the middle but I have 10 others who want to play there."