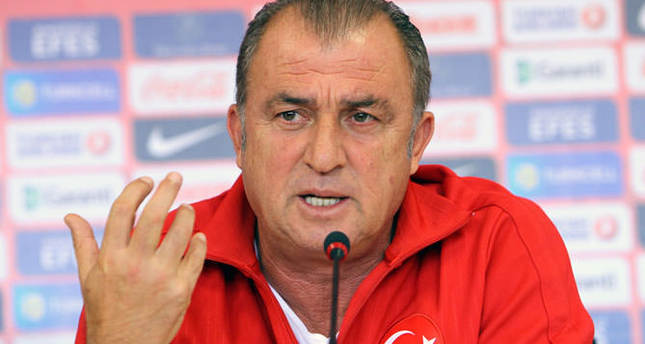 by Daily Sabah Oct 08, 2014 12:00 am
Turkey go into their UEFA EURO 2016 qualifying Group A matches this week with a raft of striking issues that could be giving coach Fatih Terim sleepless nights.

Turkey will play against the Czech Republic on Oct. 10 and Latvia on Oct. 13. However, Turkey have been rocked by a spate of injuries ahead of their qualifier against the Czech Republic on Friday with six players withdrawing through injury. Turkey's most important goalscorers, Galatasaray's Burak Yılmaz and Beşiktaş's Mustafa Pektemek, are currently injured giving Terim quite the selection headache. Moreover, six players have been ruled out of the preparation camp in Istanbul. Bayer Leverkusen center back Ömer Toprak and attacking midfielder Hakan Çalhanoğlu have both picked up calf injuries while Fenerbahçe goalkeeper Volkan Demirel has a hernia. Yılmaz has a bone marrow edema and Pektemek has a rupture in his left femur. Kaan Ayhan from Shalke 04 was already ruled out of the squad because of an injury to a tendon in his toe.

Terim has opted to bolster his options with three new names, with the squad now down to 23 players. Goalkeeper Mert Günok from Fenerbahçe and strikers Adem Büyük from Beşiktaş and Muhammet Demir from Gaziantepspor have all been called up. Turkey have begun training at the Doğan National Team Camp and Training Facilities under the direction of Terim. The coach has also called up Sivasspor defender Ümit Kurt and Akhisar Belediyespor's midfielder Güray Vural. Sivasspor defender Kurt, 23, said: "We have two key games ahead of us. First the Czech Republic, then Latvia. We should absolutely get six points out of those matches. We lost to Iceland in the first match and we have to atone for that." Akhisar Belediyespor midfielder Güray echoed those sentiments, adding that the Czechs' shock victory over Group A favourites the Netherlands in their opener has ratcheted up the pressure still further. "We have lost some key players," the 26-year-old concluded. "But there are three new players and this may give us a chance. I hope we can take it in good style."

Turkey was defeated by Iceland on Sept. 9 giving the two matches ahead extra importance for the national team. In group A, Iceland began their UEFA EURO 2016 qualifying campaign with a win thanks to a ruthless display against ten-man Turkey in Reykjavik. Kazakhstan and Latvia opened their UEFA EURO 2016 qualifying campaigns with a goalless draw in Astana on Sept. 9. The Czech Republic snatched a last-gasp 2-1 victory over Netherlands.

The qualifying competition for UEFA Euro 2016 is scheduled to be played from September 2014 to November 2015 to determine the 23 teams to join France, who qualify automatically as hosts of UEFA Euro 2016. Fifty-three member associations will participate in the qualifying process for the tournament places, with Gibraltar taking part for the first time.

All UEFA member associations are eligible to compete in the qualifying competition, with the hosts (France) qualifying directly to the finals tournament. The other 53 teams are drawn into eight groups of six teams (Groups A-H) and one group of five teams (Group I). The group winners, runners-up, and the best third-placed team (with the results against the sixth-placed team discarded) directly qualify to the finals. The eight remaining third-placed teams contest two-legged play-offs to determine the last four qualifiers for the finals.

The teams were seeded into six pots (Pots 1-5 with 9 teams and Pot 6 with 8 teams) for the qualifying group stage draw according to the UEFA national team coefficient rankings, with the title holders (Spain) automatically seeded into Pot 1.