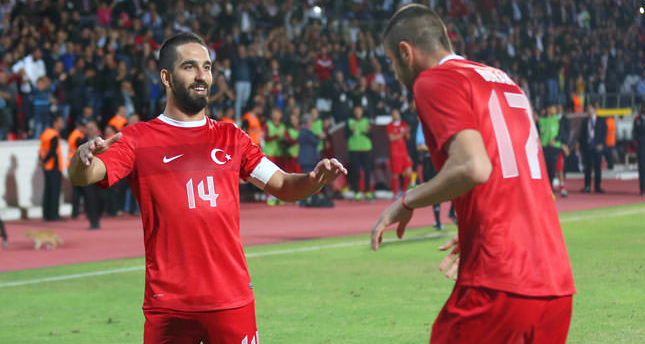 Turkey take on the Czech Republic in UEFA Euro 2016 qualifying group game today looking to undo their poor start to the campaign. Prior to the match, the Turkish Football Federation (TFF) President Yıldırım Demirören said the national team wants to gain momentum by defeating Czech Republic this afternoon before rolling on to a sequence of wins. In his article exclusively written for the TFF's special program for the Turkey-Czech Republic match, Demirören expressed his happiness at hosting an "important team" like the Czech Republic in Istanbul. Turkey began UEFA EURO 2016 qualifying with an embarrassing 3-0 defeat to Iceland.

"The team wants to get a higher ranking after the match with the Czech Republic and pick up nine points in the upcoming three matches by the end of November," Demirören said. Turkey will also play against Latvia on Oct. 13 and Kazakhstan on Nov. 16. Also, a friendly game, with Brazil, is set to take place on Nov. 12 in Istanbul also bears significance. Demirören invited all football enthusiasts to watch the match against the Czech Republic and support the national team.

"Our primary aim is to go France for the championship finals and have our supporters watch high-quality EURO 2016 qualifying group games," he continued. Turkish national team coach Fatih Terim is believed to have already settled on his tactics for the upcoming match as he tries to evade criticism and make supporters forget the Iceland defeat. Terim has comprehensively analyzed the Czechs with his colleagues and is expecting his players to not to hold on to the ball, but continuously pass and move.

Good news for Turkey came in the form of positive fitness updates for Mehmet Topal and Arda Turan, who both participated in trainings. Terim also wants players such as Caner Erkin, Turan and Topal, who shoot on site, using their exceptional skill to shoot from distance.

Separately, Wales face back-to-back qualifiers against Bosnia today. Before the match, Real Madrid star Gareth Bale believes qualifying for Euro 2016 with Wales would rank alongside the achievement of winning the Champions League with Real Madrid last season. Wales have not reached a major tournament since they qualified for the World Cup finals in 1958. The following years have been a tale of near-misses as great players such as Ryan Giggs, Mark Hughes and Ian Rush have tried and failed to steer Wales through a series of ultimately disappointing qualifying competitions. The expansion of the European Championship to 24 teams (up from 16) has given Bale and an ever-improving Wales side perhaps their best opportunity to compete among Europe's elite. "It would be right up there with it (Champions League) and hopefully we can do it," Bale told the BBC. Wales have been drawn in a favorable qualifying group that includes Bosnia, Belgium, Israel, Cyprus and Andorra, with a top-three finish giving them a chance of reaching the finals. Bale, who became the world's most expensive player when he joined Real Madrid from Tottenham Hotspur a year ago for some 100 million euros (TL 288 million), believes this European Championship offers Wales a great chance to end the long wait.

Elsewhere, Germany return as world champions to the site of one of their most painful defeats, missing several injured stars ahead of their Euro 2016 qualifyer in Poland on Saturday. Two years ago Germany lost a Euro 2012 semi-final 2-1 to Italy in Warsaw's National Stadium but midfielder Toni Kroos insists that this last German defeat in an official match is a matter of the past, now that they took world title in July in Brazil. "It is forgotten, no factor any more. Of course it was painful. But we got over it by becoming world championships," Real Madrid's Kroos said. Mario Balotelli sunk the Germans two years ago, and now they run into another formidable striker in Robert Lewandowski, who put four past Gibraltar in the first Polish qualifier and aims for more against his Bayern Munich team-mate Manuel Neuer.

"I have good memories of my many games against Manuel. I remember only too well that I scored my first Bundesliga goal against Schalke, with Neuer between the posts," the former Dortmund player Lewandowski told the UEFA website. Lewandowski hopes that Germany may be a little overconfident following the world title. Germany coach Joachim Loew said he is aware that all teams will now make an extra effort to beat them as world champions, and that the Brazil success does not lead to automatic Euro qualification. Germany started qualifying with a hard-fought 2-1 over Scotland, while Lewandowski's four helped Poland to an opening 7-0 against Gibraltar in Group D.