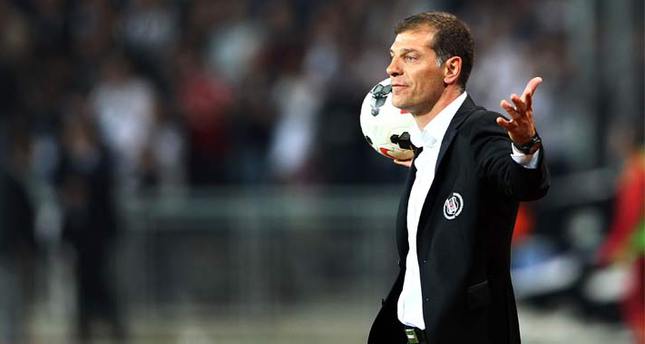 by Daily Sabah Oct 11, 2014 12:00 am
Beşiktaş manager Slaven Bilic claims that the English no longer laugh at Turkish and continental football for its propensity for sacking managers early in their tenure. Speaking on a Turkish TV channel, Bilic claimed English football is now nearly as triger-happy as Turkish football while stressing that he would like to continue at Beşiktaş without discussing contract issues. "The fate of the managers is determined according to the scoreboard," Bilic said. "[Former Manchester United and England defender] Gary Neville once said they laughed at Turks and Italians for firing managers quickly as they cancel the contract of the manager in no time." He said that when Neville made this remark coaches in the Premier League used to remain in their position for at least three or four years, but now "they also fire their managers within 40 months or so and added the English no longer laugh at Turks over this matter." Bilic expressed his resentment at the Istanbul-based football clubs due to the match between Beşiktaş and Sivasspor taking place in Ankara. "Here is what I do not understand: we are one of the most important football teams in Istanbul but none of the clubs rent their stadiums to us although there are plenty in the city," the Beşiktaş boss said. After a question about whether he would manage a national football team along with a football club if he were offered the chance, Bilic said it was unlikely as it would bring a huge amount of responsibility, adding, "When I was the manager of Croatia, I got an offer from a club. Although I got permission from the president of the federation, I declined the offer since I was not willing to carry such responsibility." When he was asked whether he would consider staying at Beşiktaş if he was offered a contract extension, Bilic said that he is happy with his working environment at the moment and that he has to concentrate while he still has a contract. He said, "We will talk when the time comes." He concluded, "I trust my team in the UEFA Europa League. We should have more points, especially in the first match. Our performance in the match against Tottenham was outstanding. We could have won, however, one point in London is good also. We are in a good position in the group."