Turkish football boss warns: Some Turkish clubs may not go to Europe 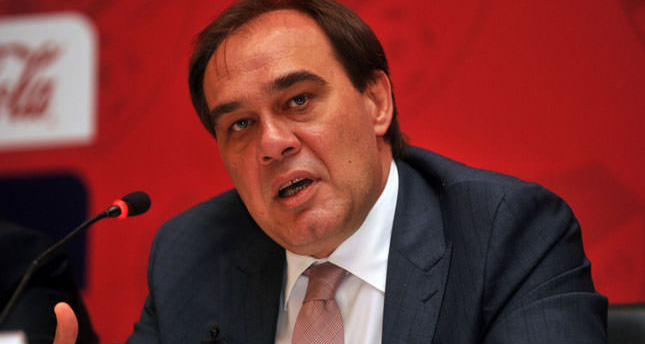 While UEFA could extend its Financial Fair Play Regulations to punish heavily-indebted clubs, Demirören said they might not grant licenses to several Turkish football clubs, in accordance with UEFA financial fair play regulations

Turkish Football Federation Chairman Yıldırım Demirören has warned Turkish clubs that they might be excluded from European competition if they don't get their house in order. Speaking on A Haber, Demirören said they could not grant licenses to several Turkish football clubs in accordance with UEFA Financial Fair Play Regulations. He also underlined that there are too many foreign players in the Turkish leagues, to the detriment of local players.

Demirören said, "There are tough days ahead for Turkish football. Unfortunately the biggest problem for Turkish football is its brand value. Its brand value is decreasing. Everybody must work on this problem. For example, our clubs will suffer big financial problems next season. Several of them won't be able to compete in European tournaments. We discussed the matter with Göksel Gümüşdağ, the chairman of the Union of Clubs and we will start a control mechanism gradually. We won't grant licenses to those who are not suitable to the criteria. We won't be tolerant on financial matters anymore. We won't allow astronomic transfers." Also speaking on the limitation of foreign footballers, Demirören continued, "The Turkish Football Federation did not make any decision on its own about the limitation on foreign footballers. We decided together with the Union of Clubs. The match number of foreign footballers is low. I mean our clubs transfer them but they don't take them onto the field. There are so many case files against Turkish clubs in FIFA. Foreign footballers who are transferred in an uncontrollable way harms Turkish football clubs' financial balance."

Meanwhile, UEFA could extend its Financial Fair Play Regulations to punish heavily-indebted clubs, with possible changes set to be discussed at a meeting with clubs next week. European football's governing body requires clubs to approach break-even on football-related business, punishing clubs including Manchester City and Paris Saint-Germain whose wealthy owners cover heavy losses. While Manchester City is debt-free, clubs such as Manchester United and Barcelona, which have heavy liabilities, could fall under any debt-level restrictions added to FFP. Barcelona's debt was recently recorded at 287 million euros (, TL 822 million; $365 million), while Manchester United's debt resulting from the 2005 leveraged takeover was given as 342 million pounds ($550 million) in the latest accounts. Strong commercial operations help United and Barcelona to finance their debt. "We are now focused on losses, and to repay the debt is part of the loss that the club can make at the end of the season," UEFA general secretary Gianni Infantino said Thursday in London. "But certainly the question of debt is something that can be put on the table." That is due to happen on Monday at a meeting UEFA is hosting with clubs. Infantino confirmed an impending rule change in the Champions League, with top-seed status only to given to the winners of the highest-ranked leagues and the titleholder. The group-stage change just has to be ratified in December by UEFA's executive committee, Infantino said. "People had difficulties in understanding how the champion of a country is in a lower pot than the third ranked in that country," Infantino said. Currently, UEFA ranks clubs over five years of results, leaving national champions Man City, Juventus and PSG among No. 2-seeded teams this season. Arsenal and FC Porto, who placed fourth and third in their respective leagues last season, were included in Pot 1, so avoided stronger teams such as Barcelona and Real Madrid in the group-stage draw. The countries given top-seed status were Spain, England, Germany, ıtaly, Portugal, France and Russia, with the eighth place in the pot assigned to the holders. Infantino was speaking at the Leaders' Sport Business Summit in London.