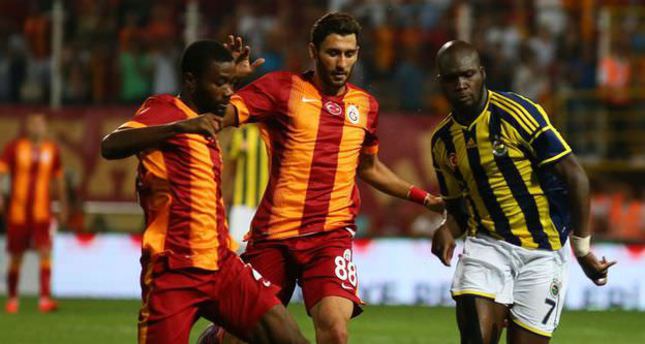 by Daily Sabah Oct 18, 2014 12:00 am
Turkish super league's powerhouses Galatasaray and Fenerbahçe will play their 380th derby on Saturday as both sides look for local bragging rights. Since their first derby on Jan. 17, 1909, the two clubs have grown to become two of the biggest clubs in Europe. According to data released by Transfermarkt, both teams are worth nearly $400 million (TL 906 million). The Galatasaray-Fenerbahçe derby is also the fifth most intense football rivalry in the world, according to CNN. CNN wrote, "Galatasaray lies on the European side of Istanbul and their fans are generally richer. Fenerbahçe's fans mostly belong to the working class and are on the Asian side of Istanbul." Historically, Fener have the better record in the derby, winning 22 more games, but in terms of titles, it is a dead heat with both teams having won the league title 19 times. The derby is unlikely to just be a local affair. Many observers from European clubs as well as derby junkies from around the world will watch the game. For many of the players on the field, the game is something of a shop window.

Galatasaray's Semih Kaya is currently being watched by La Liga champions Atletico Madrid and English giants Manchester United while another Galatasaray star, Selçuk İnan, is also believed to be a target for Premier League clubs Leicester City, Everton and Newcastle United. Arsenal and Tottenham are closely following Fenerbahçe's Emmanuel Emenike as well. Fenerbahçe's other forward, Moussa Sow, has also been linked with a host of European and Arab teams. Galatasaray's Cameroonian star described the derby as a "match of enemy brothers." He said, "Playing in this derby is an incredible feeling. The Fenerbahçe-Galatasaray derby has an extraordinary atmosphere." Galatasaray's forward Burak Yılmaz will miss the game because of an injury, however, he publically voiced his disappointment for missing the derby. The derby also carries extra intrigue as Galatasaray coach Cesare Prandelli desperately seeks a statement win to launch a bumbling season for the club. The Italian is expected to be dumped once the club appoints a new chairman later this month, but the Prandelli is believed to be keen on winning the derby to sign off his time with the club.

The former Fiorentina coach has been under constant pressure this season following early disappointing performances as well as a bad start in the Champions League that saw Galatasaray narrowly avoid defeat at home to Anderlecht and a heavy 4-1 loss to Arsenal in London. The two sides have already faced one another this season, playing in the Turkish Super Cup that saw Fenerbahçe win on penalties after the game finished 0-0 after normal time. Both team have three wins, one draw and one defeat in the Turkey's Super League. Galatasaray currently lies in third while Fenerbahçe are one place behind in fourth.