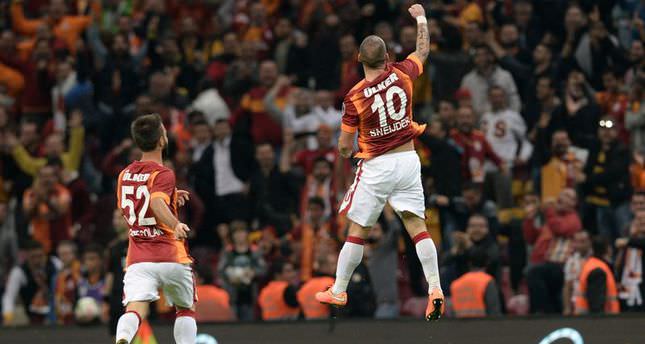 Wesley Sneijder - or "Wesley Sniper" as the Turkish press has dubbed him - claimed he struck his two incredible winning goals to "punish" Fenerbahçe goalkeeper Vokan Demirel for time wasting.

Sneijder's double, both struck from 30-plus yards, was enough to win a typically fiery encounter on Saturday as Galatasaray defeated old rivals Fenerbahçe 2-1 to at least temporarily go top of the Super League.

Fenerbahçe had seemed happy to take the draw until the Dutchman's late double gave the home side all three points.

"I punished Volkan Demirel because he was trying to kill time for a lousy draw," said Sneijder. "A footballer can feel whether he will score a goal when he gets the ball and hits it. In both goals I felt I could score before I hit the ball and I started to celebrate before the ball even entered the goal. Until that minute Volkan was trying to kill time. I think I punished him at the right time. I want to congratulate all my fellow teammates. We deserved the victory. And I thank our fans very much for their support."

Galatasaray's slow start to the season is now a fading memory as they moved into the top spot with the emphatic win. Wesley Sneijder's superb pair of long-range goals sealed the points against their bitter rivals in the most dramatic way possible.

After a nervy 88 minutes that saw both teams enjoy a host of chances to take the lead, Sneijder took the initiative with a supreme drive from 30 yards out, bending it into the top left hand corner. With the Gala fans still in rapture after taking the lead, the Dutchman had them on their feet again as he rattled off another curler from 35 yards, this time bending the ball into the top right hand corner, giving the goalkeeper no chance.

Fenerbahçe would grab a late consolation goal when Alper Potuk slid in to score from close range.

The visitors had given themselves a mountain to climb when star center back Bruno Alves was sent off early in the second half for violent conduct.

The game was also notable for the picture of Scottish manager Graeme Souness the Gala fans made before the match, showing their former manager sticking a flag into the center circle in one of the club's most iconic images.

The win at leaf temporarily put Galatasaray on top of the table - Beşiktaş played Sivasspor before print time - and eases the pressure on cosh Cesare Prandelli.

The Italian has had very little to shout about so far this season. His reign could soon come to an end after rampant speculation that the club's administrators and fans are already upset with him. While the league season is back on track, their Champions League campaign is already on the rocks after a disappointing draw against Anderlecht at home before a 4-1 thrashing to Arsenal in London. Gala also lost the Super Cup against Fener before the season started.

Not only that, but the club will elect a new chairman this month, with the winner likely to dispose of the coach as their first move.

Prandelli has also been in the headlines for all the wrong reasons this weekend after Liverpool and Italy striker Mario Balotelli.

The striker called out his old coach saying that he wasn't "a real man," after the two worked together during Italy's Euro 2012 and World Cup 2014 campaigns.

"Real men, if they have something to say, then they come to you and say it to your face," Balotelli told Sport.

"I am a face-to-face person, a straight person.

"Prandelli said bad stuff about me. Should he be going and talking to the newspapers about me straight after a game? I did not expect that and I did not reply, because there is no point.

"I have to be honest and say I was disappointed at what people were saying and how they were blaming me after the World Cup.

"I think I had two, maybe three chances all tournament. Everyone knows I scored against England, but I couldn't do much else."