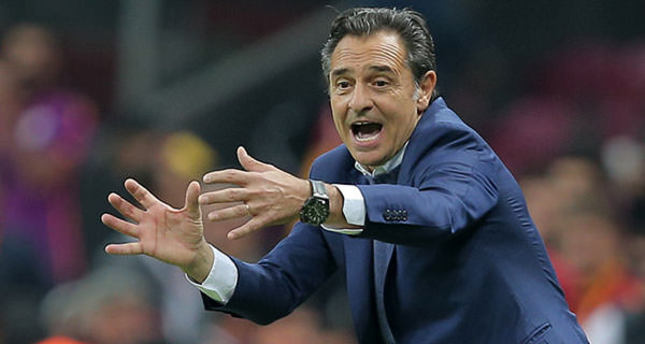 by Daily Sabah Oct 24, 2014 12:00 am
Galatasaray coach Cesare Prandelli stunned the club's fans on Wednesday night when he claimed that success in the Turkish domestic league was more important than Champions League glory. Galatasaray fans attach high importance to European competitions, with Cimbom known as the "Conqueror of Europe" by their fans, after the club won the UEFA and European Super Cup back in 2000.

When Gala won the 2000 UEFA Cup against Arsenal on penalties it was the first time a Turkish side had won a European club trophy, prompting wild celebrations on the streets of Istanbul. They also won UEFA Super Cup in the same year by defeating Real Madrid. Back in the 1988-89 season, they became the first Turkish club to reach the UEFA Champions League semi-finals.

After Galatasaray's 4-0 loss to Borussia Dortmund in the Champions League on Wednesday, Prandelli to the press claiming that the Turkish Super Lig is more important than the Champions League. "We need to ask ourselves if we are making the right moves on the pitch. You only achieve success if you really make an effort and struggle for it. My team will turn their focus on winning the domestic league. We need to improve and become a better team, we want a championship in the league. Our target has always been to win the trophy at home," Prandelli said.

"Dortmund is targeting the Champions League and has been playing very well for years. However, we are assigned to add the fourth star to the jersey. So, our aim is to become champions in the Super Lig," he continued. The statement caused a stir among Turkish football fans and media who accused Prandelli of degrading Galatasaray's proud European record.

Prandelli's opposite number, Dortmund coach Jürgen Klopp, raised a few eyebrows with his post-game comments, criticising Galatasaray's penchant for unduly putting managers under pressure. When a reporter asked him where he would start in trying to improve Turkish football, he said "I have been the coach of Dortmund since 2008. If my president had the same perceptions that your president has, I would not have got to this stage. You need patience to do this job," he said. Considering that Galatasaray has had three coaches in the last three years, Klopp said, "Patience and philosophy are very important in football."

As for the match, Borussia Dortmund brushed off their miserable Bundesliga campaign to demolish Galatasaray 4-0 in Istanbul to record their third consecutive Champions League win in stunning style. The 2013 Champions League finalists are top of Group D with nine points, three clear of second-placed Arsenal who won 2-1 at Anderlecht, and have yet to concede a goal in Europe this season. A double from Gabon winger Pierre-Emerick Aubameyang, plus goals from Marco Reus and Adrian Ramos preserved Dortmund's perfect record in Europe so far this season. Jurgen Klopp's side can book their place in the knock-out phase with another win over Galatasaray in Dortmund in the return leg in a fortnight.

"We were able to play the way we wanted to play and the early goal helped of course," said Klopp. "Aubameyang was the first choice for the game and he took his chance. We were super-concentrated in defence and we have a very good situation now in the group." Dortmund's high-flying Champions League form is in stark contrast to their horror showing in the Bundesliga where they are languishing 14th in the table after three straight defeats. Klopp's side are winless in their last five league games and he slammed Borussia for playing "senseless football" in Saturday's shock 2-1 defeat at Cologne.

"We'll enjoy tonight, but the main thing now is playing well against Hanover 96 in the league on Saturday," insisted Klopp. It was all smiles from the Dortmund boss in Istanbul as his team backed up their 2-0 win at home to Arsenal and 3-0 victory at Anderlecht to run Galatasaray ragged. "We played with a lot of concentration, had no problems in defence and our fast breaks were very dangerous," said Dortmund captain Matts Hummels. The victory was largely down to an impressive display from Aubameyang who scored twice and hit the post in the opening half an hour. The 25-year-old wasted no time as he finished a brilliant counter-attack with only nine minutes gone.

Reus beat Aurelien Chedjou to the ball on the left before firing in a pin-point pass to Aubameyang, who was left with a simple tap in at the back post. The visitors soon doubled the lead when Lukasz Piszczek crossed from the right and the ball bounced up to the perfect height for Aubameyang to tap in from close range with 18 minutes gone. Only the post denied the Gabon international a hat-trick on 31 minutes when Henrikh Mkhitaryan's cross was met by Aubameyang, but the ball ricocheted away to safety. Dortmund were not to be denied a 3-0 lead at the break. Reus unleashed a spectacular long-range shot from outside the area which dipped over Galatasaray's Uruguay goalkeeper Fernando Muslera on 41 minutes. Klopp's side claimed their ninth goal of the campaign and their fourth of the night when Ramos scored just a minute after coming off the bench. İlkay Gündoğan, who was playing his first Champions League game since the 2013 final, provided the pass and Ramos crashed home his shot on 83 minutes.