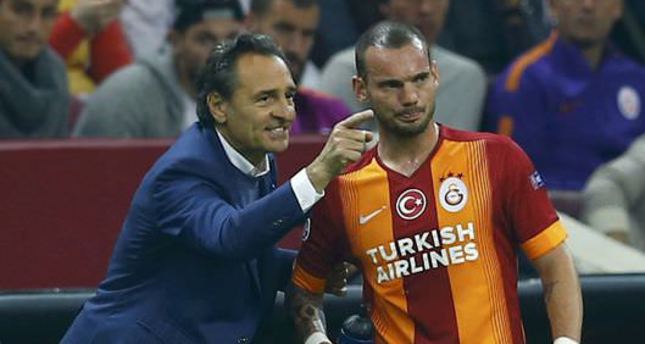 Cesare Prandelli's job at Galatasaray is hanging by a thread after an embarrassing 4-0 away to Istanbul Büyükşehir Belediyespor on Sunday despite new chairman Duygun Yarsuvat claiming the Italian has time to turn the tide. Not only was the result abject but it undermines Prandelli's statement last week that he would appease the club's poor European form with good domestic results.

After Borussia Dortmund romped to a 4-0 victory at Galatasaray on Wednesday, Prandelli infuriated Galatasaray fans by saying: "My team will turn their focus on winning the domestic league. We need to improve and become a better team, we want the league championship. Our target has always been to win the trophy at home." With Galatasaray fans attaching high importance to European competitions due to their status as the only Turkish club to have won a European competition, Prandelli's words stunned the fans. Four days after these words, Galatsaray slumped to a shocking 4-0 defeat to a fellow Istanbul team despite the renewed importance attached to domestic competition. A bitter irony for the club was that they suffered their 4-0 humbling at the Fatih Terim Stadium, a ground named after their most successful coach and the man that guided them to their sole European trophy, the 2000 UEFA Cup. Terim was also fired by the recently departed chairman Ünal Aysal.

With the Italian coach already under pressure thanks to poor performances as well as losses in the Super Cup and the Champions League, Prandelli's position is close to untenable. Not only are his results up for question, but many fans and pundits have questioned his tactical methods. His 3-men defensive system, in particular, has been considered a failure by commentators, as well as his selection policies, with Prandelli accused of choosing players that are out of form. According to sources in the Turkish press, who spoke on condition of anonymity, the new chairman Duygun Yarsuvat, who was elected on Saturday replacing Ünal Aysal, is considering parting ways with Prandelli. The names that have come to the forefront are: Ersun Yanal, archrival Fenerbahçe's former coach and Belgian Eric Gerets, who is a former coach of Galatasaray. The other names in the running are Shakhtar Donetsk's coach Mircea Lucescu - who previously managed Galatasaray - and former Fenerbahçe and Galatasaray coach Mustafa Denizli. After the match against Istanbul Büyükşehir, Prandelli refused to attend the post-match press conference.

Galatasaray's new chairman Duygun Yarsuvat said in a telephone interview that "Prandelli needs a little more time." However Turkish football commentators think Yarsuvat is not happy with Prandelli and will make a decision after the two matches. On the pitch on Sunday, the home team took the lead in the 16th minute after Brazilian midfielder Marcio Mossoro finished smartly in the area. Four minutes later Istanbul doubled the advantage when Turkish veteran striker Semih Şentürk tapped the ball past Galatasaray goalkeeper Fernando Muslera, bringing the score to 2-0. Rain affected the match in the early minutes of the second half with the ball being frequently stuck in the boggy pitch. In the 69th minute of the game, Mossoro made it three for Istanbul with the Brazilian putting away a first-time effort for his second of the match. With 14 minutes to go, the home side finished off the win when Doka Madureira received the ball from his teammate Semih Senturk before finishing calmly in the area. In stoppage time, Galatasaray's Turkish international striker Burak Yılmaz wasted a good chance in the penalty box, but it would only have been a consolation goal for Gala.