Who is the coach of Fenerbahçe? 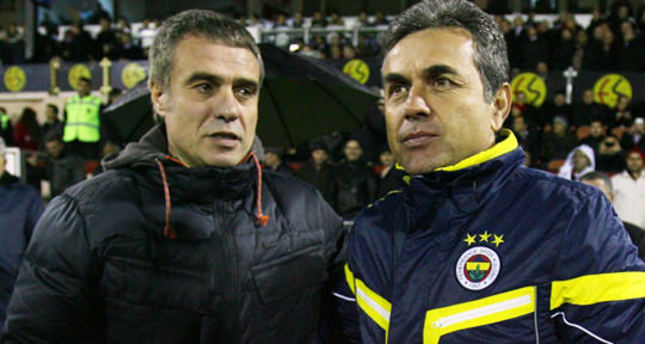 by Arda Alan Işık Oct 28, 2014 12:00 am
Fenerbahçe are going through a hard time at the moment. Almost all of their players are out of form and the systematic shape of the team, which was created by Aykut Kocaman and Ersun Yanal, is gone. Thus, the team is struggling to play well and get decent results. Fanatik columnist Mehmet Demirkol claims that this situation stems from the "revolt" against Yanal at the beginning of this season. He said, "Some Barons in the team resisted the hard methods of Yanal and look at their physical condition now," implying that some players plotted against Yanal. However, I do not intend to argue whether the players persuaded chairman Aziz Yıldırım to change the coach or not. But, Demirkol's comparison between Fenerbahçe's performances last year and this year is accurate.

First of all, before talking about strategies and tactics, a team has to be physically fit to satisfy the demands of the game. It is like the bass in a song; if it does not sound appropriate, you cannot build complex and sharp sounds over it. Even if Fenerbahçe's game was not particularly complex or sharp last season, the team was at least physically fit enough to compensate for it. Fitness brings reliability and both Aykut Kocaman and Ersun Yanal spent a lot of their time at Fenerbahçe creating a fit and reliable team. The key to Fenerbahçe's championship last year was their reliability and sustainability. Again, it was not the most creative team in the world but they were good enough to win the league. Then something happened at the club. Some people started to disseminate irresponsible and irrelevant news about Yanal's personal life and upload leaked conversations on the internet. In the end, Yanal resigned from his job and İsmail Kartal was assigned as the new coach.

Since the day Kartal took charge of the team, Fenerbahçe's game has got worse and worse. But he was the assistant manager of the club in both the Kocaman and Yanal eras and in almost every interview he states that he has the same ideals as them. Then why has he been unable to preserve the team's system? Why has Fenerbahçe's game worsened rather than improved over the last three years? Actually these questions bring to mind Mehmet Demirkol's theory that indicates the players have autonomy at the club and that Yıldırım has let them have it. With this in mind, we should carefully consider Yıldırım's statements after the 2-1 loss to Galatasaray in last weekend's derby: "I see İsmail [Kartal] as my child and he will stay until the end of the season. Sometimes he talks too much and I warned him about this situation. From now on he will speak more properly."

Obviously, this is not the kind of a coach-president relationship you want to see at a modern football club. But Yıldırım has been managing the club for almost 20 years and he has conducted his business like this from the start. His meddling in team affairs is so well known and notorious that Kartal has needed to say publically that he never receives phone calls from the president about the match day squad. Some coaches got used to Yıldırım and worked with him several times, like Christoph Daum, but some coaches, like Yanal, could not get on with him and most of the time his principles conflicted with the Yıldırım's strong opinions on the team. When considering Yanal's story at Fenerbahçe, it is actually hard to say who the coach of Fenerbahçe is right now.

Of course, this is not a sustainable way to administrate a team because industrial football does not acknowledge this kind of an administration. Yıldırım wants to control everything in the club and he rarely gives others a chance. After the match fixing scandal in 2011, he became an icon for Fenerbahçe fans and he uses this perception to strengthen his position. His unquestionable position within the club prevents possible reforms that could take Fenerbahçe further. He has to step back and let professionals do their job. Once everyone agrees that İsmail Kartal is the real coach of Fenerbahçe, then the team can start to make progress.