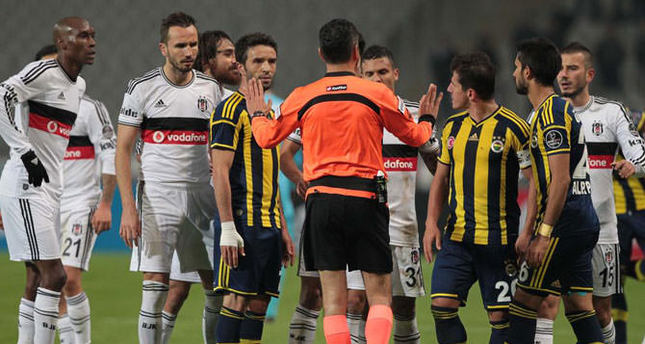 Beşİktaş boss Slavan Bilic claims the referee was to blame for his side's 2-0 home loss to bitter rivals Fenerbahçe on Sunday night.

The Black Eagles went behind in the opening minutes before losing Olcay Şahan to a red card just before half time. Fenerbahçe later added a second to put the nail in the coffin. The game was also marred by a half time altercation in the tunnel - where Bilic claims he was verbally abused - as well as fan disturbance after the game.

Şahan was initially booked for a clear foul just outside the penalty area on Caner Erkin before getting his marching orders after a foul on Fener captain Emre Belözoğlu.

The win puts Fenerbahçe clear at the top of the table while Beşiktaş were left to lick their wounds.

"The referee killed the game with the second yellow card for Şahan. In the second half we tried to come back. I can only praise my players for the effort they gave with 10 against 11," Bilic said.

"Unfortunately we didn't score and made another unnecessary sloppy mistake for their second goal."

Emmanuel Eminike and Moussa Sow did the damage for the victors netting three minutes after the start of the game and three minutes from the end of the game. Sow also had a goal disallowed in the second half for offside, sadly overshadowing what was a superb bicycle kick.

Eminike's early opener came after Alper Oturk burst through the Beşiktaş defense before pulling the ball back to the Nigerian who had a simple finish with his in-step. After the shock wore off, Beşiktaş got back into the game, forcing two top saves from Fener goalkeeper Volkan Demirel, both from powerful headers.

After Sahan's red card, the two sides went into half time fired up as Emre and Bilic went at it in the tunnel, all caught by television cameras.

Bilic said, "I just asked one of their players why he used bad words against me and they responded by saying they can do anything they want and said 'who are you?'

Beşiktaş had much of the second half but the game was completed when Eminike picked up the ball deep in the Beşiktaş half and played a perfect through ball for Sow who finished first time.

Fenerbahçe manager Ismael Kartal praised his team as well as the opposition for handling the loss of Şahan.

"We were well organized and well disciplined," Kartal said.

"We put on a good performance against a side playing some of the best football in the league.

"We made a few mistakes but we got the three points at the end of the day.

"I have to congratulate my opposition, Beşiktaş played very well despite being down to 10 men for much of the match.

"We beat a very strong side and showed our strength and that we are very much in the title race this season. We could have scored more goals had we converted more chances but I have to praise my players for the spirit they showed. They proved themselves under the high pressure environment of an Istanbul derby."

As has too often become the case, off-the-tension marred the night's action. Fans, players and club officials were all guilty of provocation in one form or another.

Beşiktaş's chairman Fikret Orman couldn't hide his anger and said, "The cards shown at Olcay were unfair. Emre swore at the referee but he was not shown a red card. The people who direct Turkish football don't understand our style. So we will change our style. We will talk in a way that they understand us from now on."

Fenerbahçe's administrator Mahmut Uslu reacted angrily to the Beşiktaş chairman, saying, "During the match, Beşiktaş fans swore at us. We underlined that we did not rig [fix matches]. So I asked Beşiktaş fans whether Beşiktaş fix matches or not. The red card was not unfair. If Emenike had played better we could have scored three or more goals."