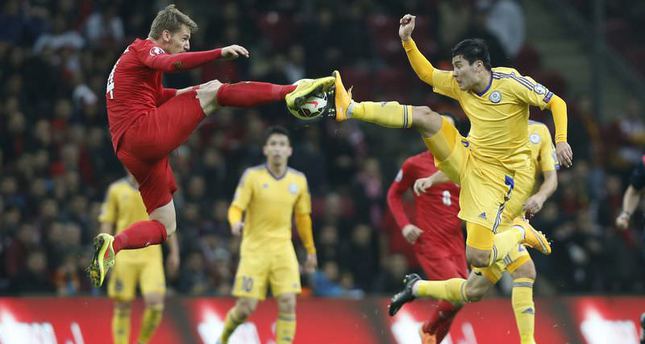 by AA
Nov 17, 2014 12:00 am
Turkey defeated Kazakhstan 3-1 in their European championship match on Sunday night. The 2016 European Championship Group A qualifier match was played at Turk Telekom Arena in Istanbul

In the 22nd minute, Turkish forward Umut Bulut wasted a chance in the box. Ozan Tufan made the cross but Umut missed the target. A minute later, Turkey striker Burak Yilmaz beat the offside trap in the area, however he wasted a great one-on-one chance.

In the 25th minute, Burak was brought down in the penalty area, so the referee pointed to the white spot for a penalty kick. The Galatasaray goal poacher successfully converted it, and Turkey was 1-0 ahead in the 26th minute.

Three minutes later Burak found the net once again. Turkish winger Volkan Sen nodded the ball to the center, and Burak Yilmaz took the shot without trapping the ball. Kazakh goalkeeper Aleksandr Mokin fumbled it, and the ball went in, 2-0.

In the 69th minute, Burak Yilmaz received a deadly pass from Atletico Madrid star Arda Turan and Burak made a close range drive, Kazakh goalkeeper Mokin deflected it, Turkish forward Umut Bulut tried to tap the ball in when it was loose, but he also missed the target.

Turkey was close to making it three in the 76th minute. Arda took a low shot outside the Kazakh box, but the ball was out.

Turkish defender Serdar Aziz increased the margin to three in the 83rd minute when he found the net with a header from a corner kick whipped by Gokhan Tore. The 24-year-old Bursaspor center-back Serdar scored on his debut.

In the 86th minute, Turkey's central midfielder Mehmet Topal incurred a penalty in action with his Kazakh opponent Ulan Konysbaev in the penalty area. Thus the referee awarded Kazakhstan a penalty kick. Samat Smakov scored from the spot, 3-1.

Four minutes later Arda Turan was tripped in the box, and he was expecting a penalty, however the referee said play on. Moreover the official hit him a yellow card for attempting to deceive the referee.

Having received a yellow card, Arda Turan is suspended for the next match against Netherlands in March.

The victory versus Kazakhstan gave Turkey its first win in the group. "The Crescent-Stars" increased their points to 4 in the standings.

Meanwhile in another match of the same group, Netherlands cruised past Latvia 6-0 at Amsterdam Arena, Arjen Robben and Klaas-Jan Huntelaar scored two goals each. Nicknamed "Oranje" (The Oranges), Netherlands increased their points in the group to six and secured third position as of matchday four.

Two other Group A teams, Czech Republic and Iceland, met in Plzen. The Czech Republic won the game 2-1, so they are now leading the group with 12 points.

Turkish veteran goalkeeper Volkan Demirel surprisingly left the pitch before the match as the 33-year-old international was screamed at by Turkish fans while he was warming up. Backup goalkeeper Volkan Babacan was picked for the starting 11.

Results are as follows: