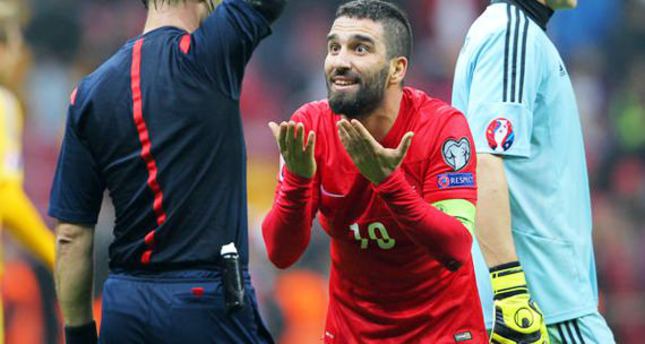 Burak Yılmaz and Serdar Aziz get on the score sheet as Turkey get their qualifying campaign back on track. Arda Turan said, “We will stand up again after hard times”

Turkey captain Arda Turan has backed his teammates to "stand up" after their confidence-boosting 3-1 win over Kazakhstan in UEFA Euro 2016 qualifying. The national team picked up their first win of the campaign against the 132nd-ranked Kazakhstan following defeats to Holland, Iceland and Latvia thanks to goals from Burak Yılmaz (2) and Serdar Aziz. Despite the paucity of quality within the opposition, Turkey put on an encouraging display and were rarely put under pressure by the Kazakhs. Turan picked up a yellow card for diving in the 90th minute and will be suspended for the crunch match with the Netherlands in the next fixture. But the Atletico Madrid star is confident the win can help push the team toward qualification for Euro2016.

"First of all, we are happy that we won - it was an important game for us," Turan said. "Yes we lost our confidence and are having bad days, but we won't surrender. We still fully believe in ourselves. We've come back from tough situations like this before and can do that again.

"Today, I thank the fans for their belief. These are hard times, but we will stand up again. These players can do it. We will work hard and pray. If we can do it, we will do it all together. We need to look out for each other. If we fall, we will fall together; if we stand, we will stand together.

"Kazakhstan played well and have scored in each of their games. They are progressing and I hope they do well in the future."

Turan's decisive yellow card could prove crucial for qualification. The Netherlands bring the sternest test for the Crescent Stars, who will be severely hindered by the loss of their star midfielder. Frustratingly for Turkey, Turan picked up his yellow card in the last minute of the game when the game was already won. Coach Fatih Terim backed his decision to keep his captain on the field for longer than was necessary and believes his team still has a chance against the Dutch.

"Arda [Turan] is a key player and we fielded him in a different role tonight," said Terim. "Arda is an important weapon for our team. Of course you need a player like Arda when you play against sides like the Netherlands. But our national team needs to get used to such situations. I didn't substitute him because he seemed to be enjoying the game.

"There are still six matches to be played. When the draw was made, I mentioned four teams of which three would eventually qualify for the finals. Now those teams are ranked in the top four. We can't afford to drop any points." Despite Turkey's dominance throughout the game the team were fortuitous in some of their goals. Yılmaz was bundled over clumsily in the penalty area in the 26th minute. The Galatasarary man brushed himself off and netted the penalty, only a minute after missing a guilt-edged chance. The striker had a second three minutes later but he could barely take credit for it. After a swift move, Yılmaz struck from the edge of the box, but his effort went straight at goalkeeper Aleksandr Mokin who inexplicably shoveled the ball into his goal. Serdar Aziz put the icing on the cake seven minutes from time, heading in a Gökhan Töre corner before Kazakhstan grabbed a consolation goal three minutes from time.

Coach Terim was more than pleased with the team's performance, calling it "brilliant."

"I hope we can win all our remaining games in the group," said Terim. "We'll try to do that. Tonight there was a really good challenge on the field. We dominated the entire game. We played in a brilliant fashion in the first half. Obviously, there could be a difference in strength between Turkey and Kazakhstan, but their power and ambition made them a team which needed to be taken seriously. "Tonight Burak [Yılmaz] scored the goals. Umut [Bulut] couldn't, but he pressed up front and made sacrifices and was successful too. It could have been a bigger victory for us, but what was important was getting three points. Selçuk [İnan]'s performance was really good. He played his best game of the last few weeks."