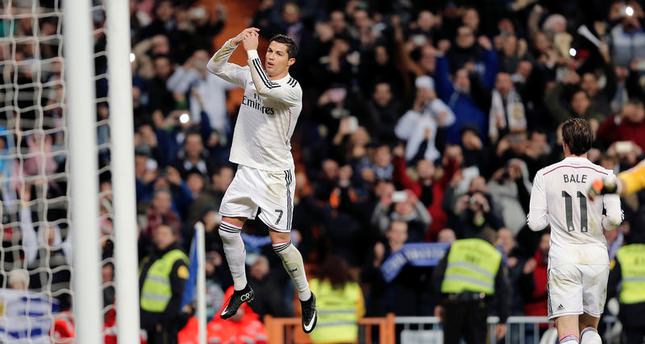 by Dec 06, 2014 12:00 am
Cristiano Ronaldo netted a record 23rd hat-trick in La Liga and his 200th goal in the Spanish top flight as Real Madrid equalled the Spanish record of 18 consecutive wins in all competitions on Saturday.

Ronaldo scored all of his side's goals in a 3-0 win over Celta Vigo at the Santiago Bernabeu to pass the hat-trick record of Telmo Zarra, whose record as La Liga's all-time top goalscorer was recently usurped by Lionel Messi, and the late Madrid legend Alfredo di Stefano, who both scored 22 hat-tricks.

And his third goal on the night saw him reach his double century of La Liga goals in just 179 games.

With 18 straight wins, Carlo Ancelotti's side have now matched the record set by Frank Rijkaard's Barcelona team in the 2005/06 season, and will have their chance to create more history on Tuesday when they face Ludogorets Razgrad in their final Champions League group game.
Last Update: Dec 07, 2014 11:04 am
RELATED TOPICS