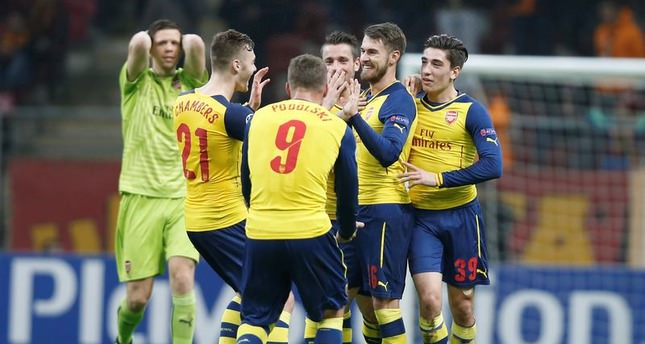 by Dec 09, 2014 12:00 am
Stunning goals from Lukas Podolski and Aaron Ramsey, who both scored twice, gave Arsenal a morale-boosting 4-1 win over Galatasaray as they finished in second place in Group D of the Champions League on Tuesday.

Arsenal were already assured of a place in the last 16 for the 15th successive season with the only issue to be decided being whether they could overtake Borussia Dortmund to finish top of the standings.

But Borussia's 1-1 draw with Anderlecht meant the Germans topped the section on 13 points, the same as Arsenal but top on goal difference, followed by Anderlecht on six and Galatasaray on one.

The outcome at the Turk Telecom Arena was virtually settled inside the first 11 minutes after Podolski slammed in a blistering left-foot shot to open the scoring and Ramsey slotted home eight minutes later after good approach work from Alex Oxlade-Chamberlain.

Ramsey then scored one of the goals of the season after 29 minutes when he smashed an unstoppable left-foot volley past goalkeeper Sinan Bolat from 30 metres.

Wesley Sneijder scored a consolation for the home side with a brilliantly-executed free-kick after 88 minutes before Podolski made it 4-1 with the last kick of the game.