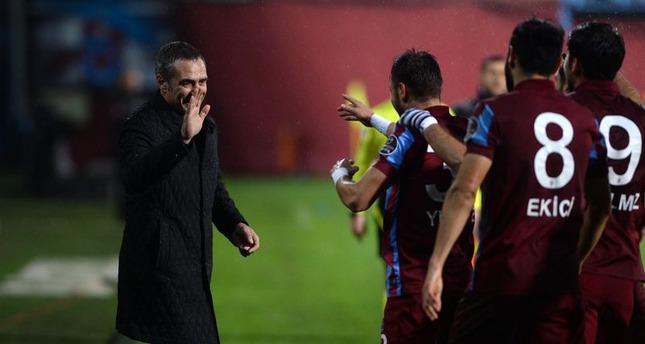 by Arda Alan Işık Dec 09, 2014 12:00 am
Like most journalists, almost every football columnist has a habit of getting lost in the confusion. Every day they refresh their memory and "live in the moment." One day, they say a team has a "great" strategy and two days later they lower the boom on the same team. However, you might think the measure of a football game is the score, but an analytical review is not about the results, it deals with the causes. Thus, such an arrogant approach to football, like a king criticizing his meal every day without even thinking about what is going on in the kitchen, is an extreme luxury. The only way to take Turkish football to another level is pulling back the lense a little bit and giving the credit to the ones who really deserve it.

Ersun Yanal is one of the few coaches who has enough tactical and managerial savvy to deserve praise from the Turkish football community. The crucial point is, his credit does not come from his team's sensational win against Galatasaray. Demeaning his coaching skills by pointing to his success in one game, like other columnists do, would be a unacceptable. In contrast, what makes Ersun Yanal a true strategist, is his long term plans and analytical mind.

However, as we saw in the Beşiktaş game, long-term plans have a lot of ups and downs. Trabzonspor hired Yanal as coach just a few weeks ago and there is still not enough evidence to accurately evaluate Yanal's effect on the team. Trabzonspor's inconsistent performances are normal. While settling a strategy, the team will play a lot of games like they played against Galatasaray, and against Beşiktaş. This is a matter of time, but just as Mao Zedong said, "In a suitable temperature an egg changes into a chicken, but no temperature can change a stone into a chicken," and Yanal gives us strong evidence to believe a chicken could grow out of this egg.

Nevertheless, Yanal has a great deal of work to do to create a successful team. First of all, some of his players are not mentally ready to play at this level of football. Sometimes Trabzon's defense made mistakes that you could would expect to see in a reserve team match. So, firstly he has to find trustable players, or just like what he did in his previous teams, he has to take present ones to a higher level. Only then we can talk about Trabzonspor's strategy, because most of the time ball does not even come to the opponents half in a proper way right now.

Secondly, Yanal has some mutinies to crush or get rid of. Mehmet Ekici and Özer Hurmacı, who are supposed to organize Yanal's strategy on the pitch, have been troublingly wayward. They play with the ball much more than they should and they try to create opportunities on their own. When this happens, Trabzon lose control and the team struggles. What is more, unlike many coaches, Yanal is not one of those coaches that employs a game plan based on chaos. Yes, Yanal wants his team to play fast and fluid, but playing every ball directly to the front and trying to penetrate on every occasion only damages Trabzon's game.

Last but not least, Beşiktaş coach Slaven Bilic needs to be aware of the facts of the match with Trabzonspor. Even if Beşiktaş scored three goals, they all came from the counter attacks and simple mistakes by the Trabzon defense. We still cannot see a sustainable game plan. The only thing we can see is a team that trying to play fast. Bilic should appreciate Jose Sosa's playmaking skills. He was the starring actor in almost all opportunity. Finally, I believe Mustafa Pektemek needs to put some time in on improving his body. If a player gets serious injuries all the time, and if nearly all of them are his own fault, it is obvious that something is missing.

Trabzonspor goalkeeper Fatih Öztürk is one of the players that is not ready to play at this level of football. An unfortunate injury to the first choice, Onur Kıvrak, made Trabzon a very vulnerable team. As we saw in the first goal, sometimes Öztürk acts unthinkingly and makes simple but dangerous mistakes. A team's confidence with their goalkeeper is one of the most significant elements of a team. But now Trabzonspor's imbalanced defensive line will only get worse when they look at who is the last line of defense.